Mr. Vegas offload on a pastor/prophetess attack on Koffee.

It seems Jamaica’s beloved new sensation Koffee, is now at the heart of a controversy surrounding a prophetess’ latest vision/prophecy. Williams Sheena, otherwise called Sheenz Eagle Eyes Williams or Eagle-Eye Watchman on Facebook, has recently released a video on her Facebook account in a bid to get Koffee’s attention. Before hitting play on the 22-minutes long video, you are greeted with the following caption.

“Prophetic Warning to Koffee 9.29.2019. Do not promote the homosexual lifestyle to our young people in Jamaica. I see people in high places and of influence, influencing Koffee to promote this evil satanic agenda. God is warning her to REJECT IT?

The original video as since amassed 373 Comments, 391 Shares, and 6.6K Views and is being shared across various social media platforms at a rapid pace.

With such a bold move, one has to ask, who is Sheena Williams? A review of her social media shows she hails from Kingston, Jamaica. However, she currently resides in Boca Raton, Florida, with her husband. While there is not a lot of information available, it seems she has a loyal following on both her Facebook pages, with persons tuning in daily to hear her teachings and prophecies. 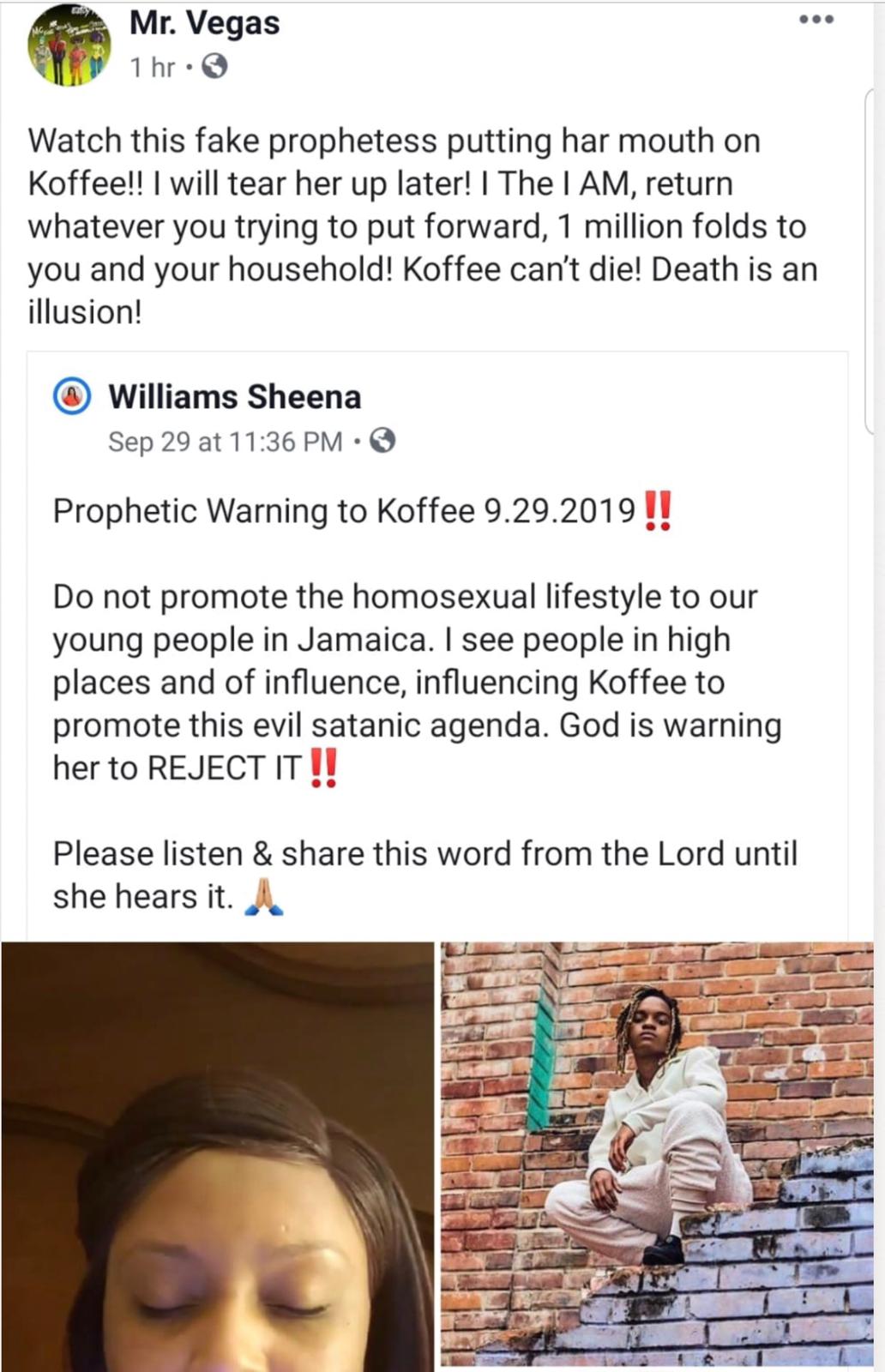 A review of her Facebook pages does lay bare a few interesting posts such as, “Bahamas outlawed street preaching and God showed them who is boss. The Prophets prophesied. Jamaica learn from this.” This seems it was a direct message to the people of Bahaman before they were hit by Dorian. Dorian hit the Bahamas as a Category 5 storm with sustained wind speeds of 185 mph.

Another post made in February of this year outlined her vision of a young schoolgirl dying a result of drowning. In May of this same year, Shanique Thompson drowned at sea in the Harbour View area of Kingston under similar circumstances, as mentioned by Williams.

Could these be acts of coincidence, or do we have a true prophet on our hands?

Her Facebook page shows that she sent out a blast asking for contact information for Koffee on September 11, 2019. This would coincide with the timeline she spoke of in her video.

Sheena’s most recent upload about the Jamaican superstar Koffee states that persons in high places will be speaking to Koffee to embrace and influence homosexuality to the masses.

According to Williams, her vision took place in a stadium filled with youngsters. She was preaching against LGBT community and was getting favorable responses from the audience except for Koffee. During her vision, she claims that the young singer will get into her car and drive off. The vision takes a terrible turn when the singer crashes and dies instantaneously, after driving off.

She continues throughout the video to warn Koffee to heed the word of God or face sudden death.

Many persons in society have since voiced their opinions on this video. Popular dancehall entertainer and social media vlogger Mr. Vegas has shared the video with the following caption: “Watch this fake prophetess putting har mouth on Koffee!! I will tear her up later! I The I AM, return whatever you trying to put forward, 1 million folds to you and your household! Koffee can’t die! Death is an illusion!”

A lot of persons share his view on the situation, with some going lengths to ask, “W*F is Wrong with these psychopaths?”

The comments below the video show that there are devoted believers who stand by her prophecies, citing prior visions of plane crashes and deaths as her being a true messenger of Jesus. Nevertheless, Mr. Vegas and other members of the reggae/dancehall community are asking her to leave Koffee alone.