Lizzo does not play when it comes to her meals.

No, that is in no way an insult to her full figure that she is ever so proud of as she continues to break barriers for different body types in the music industry — she literally threatened a Postmates driver over her food.

Lizzo on Twitter early Tuesday morning tweeted to Postmates, a third-party food delivery service, that her driver stole her food and she demanded an explanation. “Hey @Postmates this girl Tiffany W. stole my food she lucky I don’t fight no more,” she said while posting a photo of the Postmates employee. The “Truth Hurts” singer did not go on to elaborate any details of the incident or how she concluded that the food was stolen, but Postmates quickly replied saying they would look into the matter. 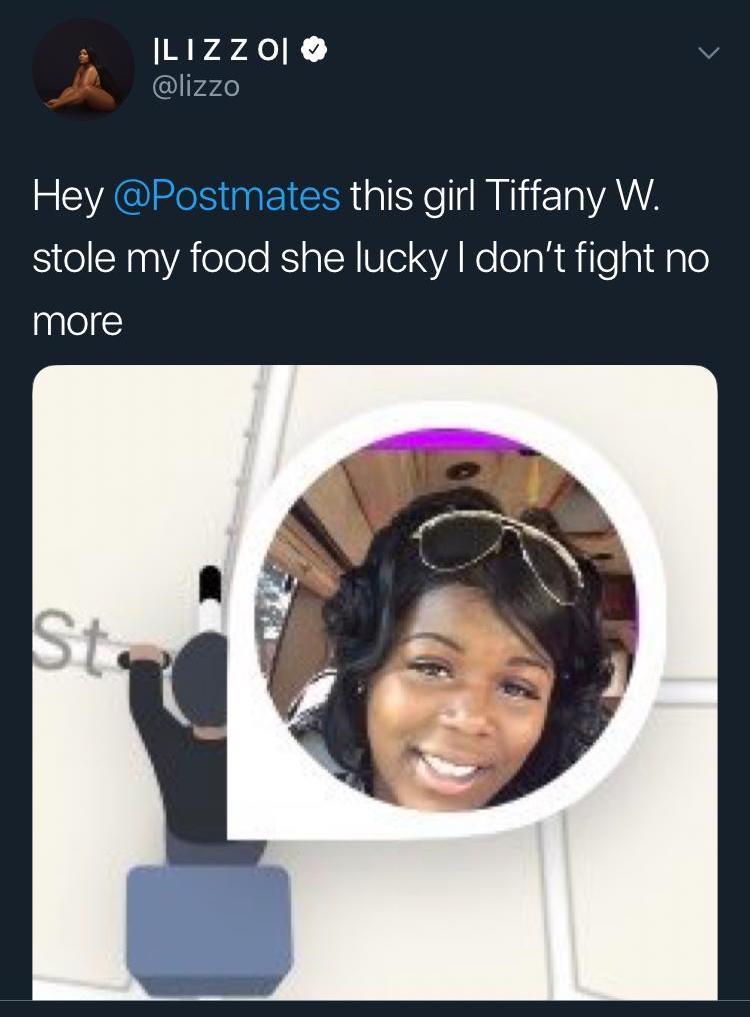 Having one of the top artists in the world with a No. 1 song publicly bash your brand has to be a PR nightmare. Lizzo said she had already direct messaged the company with more details. Postmates’ competitor, Door Dash, chimed in on the thread with a clever pun saying, “Truth Hurts, need something more exciting? DM us.”

That tweet and others sparked mixed reactions from fans — some who found it funny that Lizzo threatened the employee while others said she took it too far exposing her name and photo on her platform. Both Lizzo and “Tiffany W.” were trending on Twitter throughout the morning.

Lizzo later deleted her tweet and began to promote a new song instead. She must have felt the pressure from some of the backlash as she responded to a tweet from fellow R&B star Khelani about the highs and lows of social media. “I think when you develop a positive relationship wit twitter where you really just accept it for what it is … it’s the funniest best sh*t of all time,” Khelani said. “it’s an ebb & flow for me,” Lizzo replied. “twitta not my friend today imma have to log tf off.”

? it’s an ebb & flow for me…. twitta not my friend today imma have to log tf off https://t.co/nGagVe9bR4

Check out some of the reaction to the incident below:

If you thought white women went up for Lizzo before, just wait until they find out she has big let me speak to the manager energy

How Tiffany is walking around with Lizzo’s food
pic.twitter.com/AB8cE91Vuw

Tiffany W. walking into the crib with Lizzo’s 4 for $4: pic.twitter.com/HYlyPLSC55