Six persons lost their lives at a hip-hop concert in Italy last night where rapper Sfera Ebbasta was booked to performed.

The full details are still sketchy, but multiple publications confirmed that at least six persons were pronounced dead and another 53 people injured following a massive stampede at Italian nightclub Lanterna Azzurra in Corinaldo. Sources say a hip-hop event was being held at the club which was overcrowded at the time of the incident. Teenagers were seen running from an exit of the club early this morning, and some sources say someone sprayed an irritant inside the air in the club that triggered the stampede.

Cops and the fire department responded to the scene, and that’s when the six bodies and several injured persons with broken bones and other injuries were found. It appears that the five individuals were crushed to death in the stampede. Five of the deceased ages from 14 to 16, while one mother, whose age is 39, was also killed, ABC News reported. 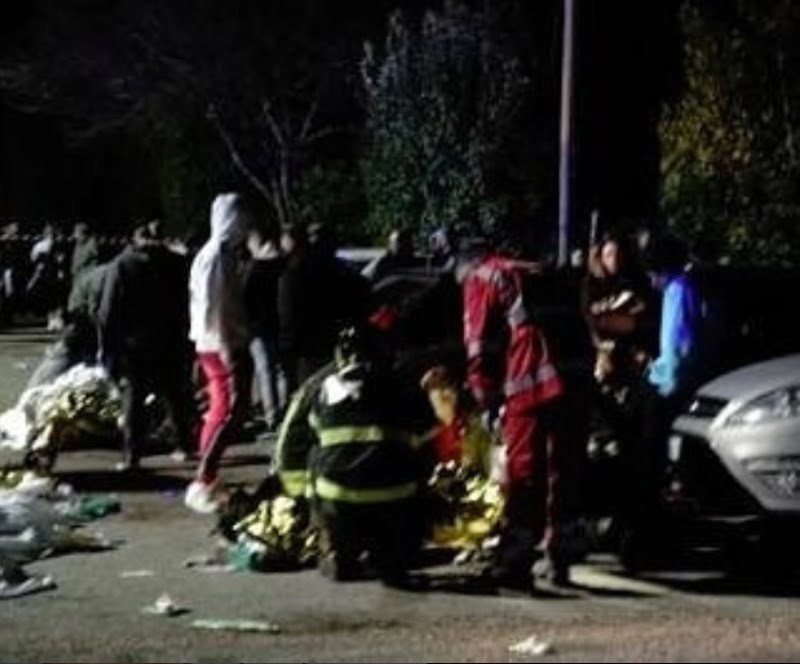 The dead mom was reportedly accompanying her 8-year-old daughter to the concert. She died leaving four kids motherless. Italian state radio reported that the dead teenagers include two boys and three girls, who died from severe head injuries from the melee.

A local news outlet reported that Italian rapper Sfera Ebbasta was set to perform at the event, but the incident took place some 30 minutes before the show was set to begin at approximately 1 AM on Saturday. Authorities told reporters that the venue had a capacity of 870 people, but the promoters overbooked the show o the tune of 1400 tickets. Additionally, the club has three rooms, and only one of the rooms was opened for the show, and that room had a maximum capacity of 469.

Rapper Sfera Ebbasta has since shared his reaction to the tragic incident on his Instagram page. “I am deeply saddened by what happened last night in Corinaldo,” Sfera wrote. “It is difficult to find the right words to express the regret and pain of these tragedies. I do not want to make judgments about all of this, I just want EVERYONE to stop and think about how dangerous and stupid it can be to use pepper spray in a disco. Thanks to all the people, the ambulances and the forces of the order who have helped during the night.”