Nicki Minaj appears to have a new man and a giant diamond engagement ring on her finger.

It was only a few weeks ago that Nicki Minaj was rumored to be dating Formula One race car driver Lewis Hamilton. There was substantial evidence suggesting that the two were an item after they were spotted vacationing together in Dubai. Perhaps it was just or fling, or maybe they were working on a project. On Sunday night, the Queen rapper posted two photos on her Instagram page that got a lot of tongues wagging.

The first photo of her shows her taking a selfie using a Snapchat filter with an unknown man in the backdrop. The selfie has the date November 25th at 3:15 AM. That’s early in the morning which suggest that she was out partying. In the second photo, Nicki posted a photo of herself and the man throwing up a gang sign. That’s when you will notice a giant diamond ring on her ring finger. 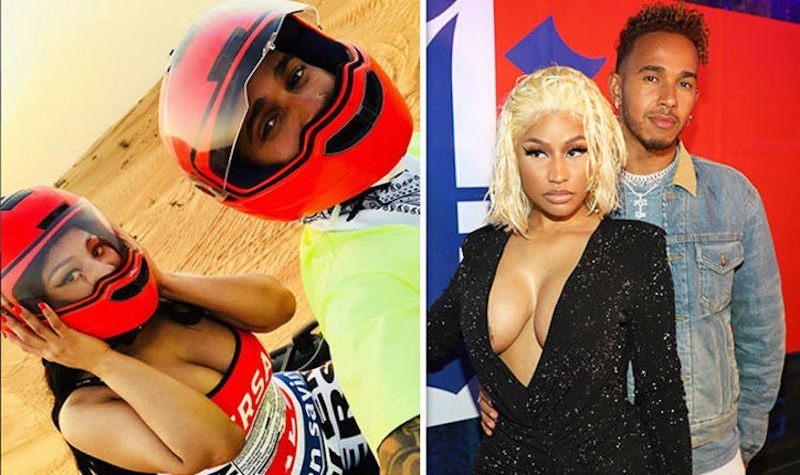 “You know da phkn vybez #QGTM,” she captioned the photos. Nicki Minaj fans have been bombarding her comments with a lot of questions. “Queen are you getting married we need to know and we need to know who is this fine gentleman you’re posting up with?” one female fan wrote.

“She really came up on IG, posted these pics and dipped knew damn well we was finna squirm looking at the ring and the guy BOY,” another fan added.

Either Nicki Minaj is trolling us, or she is sending some subliminal messages that will soon come out in the open. Her ex-boyfriend Meek Mill is about to drop his new album, Championship, and some rumors are claiming that he has a song about her on the project. It could be that she is sending shots at Meek who gave her a giant engagement ring when they were dating.