Mavado is now a wanted man.

The Constant Spring Police issued a notice on Tuesday for Mavado, whose real name is David Brooks of a Norbrook, St. Andrew address, to report to the police station by midday on Wednesday. The Jamaica Constabulary Force posted the notice on Twitter and it’s unclear of the dancehall singer is even still on the island, per our sources. The Gully Gad was shot at in Cassava Piece last weekend after getting in a fight with a don in the community. He went there to settle a dispute between his son and another man.

Interestingly, after escaping the rain of bullets, Mavado ran to said Constant Spring Police Station where he filed a report that has since lead to the arrest of one suspect. The JCF didn’t reveal in their tweet why they want the artist or if any charges will be laid against him, but law enforcement sources are telling us to look out for some major developments. 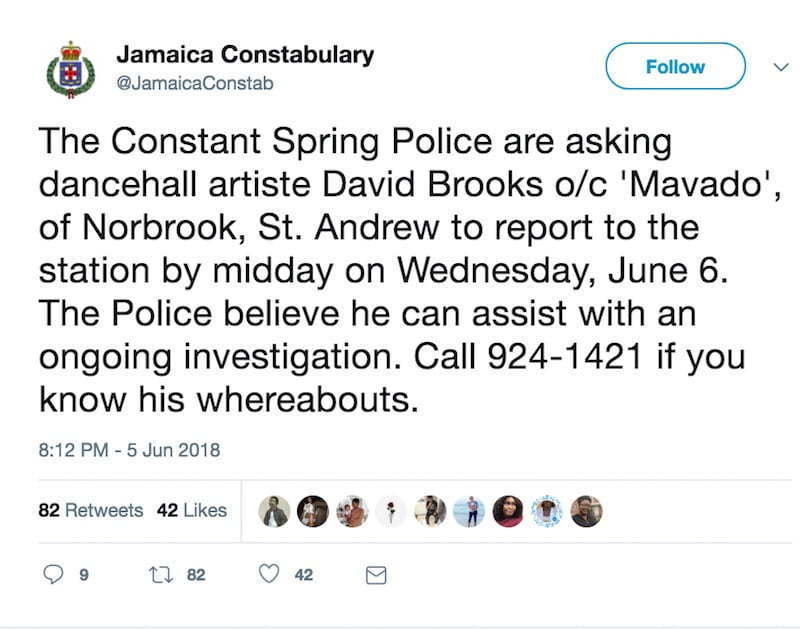 Sources close to Mavado told Urban Islandz that this is just a ply by the police department to grab headlines because he is a famous entertainer. “Singer [Mavado] already talked to the police so what more they want, they know his lawyer, so why putting out a wanted notice when the man is a big artist, where is he going to hide,” sources told us.

Within hours of the Mavado shooting incident last Saturday, another man name Ian Robinson, believed to be an associate of Mavado, was shot and killed outside the Constant Spring Market. Police says they are investigating the two incident separately but are looking to see if they are linked.

Mavado has since shared his reaction to news of the shooting incident saying that some of what’s being reported in the media is not true. He didn’t clarify any misinformation and has since deleted the post on social media.