Bounty Killer says he was inspired by Shaggy to donate 63 beds to two hospitals in Kingston.

Last week, Shaggy announced that his annual benefit concert Shaggy and Friends raised $100 million for the Bustamante Hospital for Children. This week, Bounty Killer announced that he donated 60 beds to the Kingston Public Hospital and the Victoria Jubilee hospital. The dancehall legend says he felt the need to act because of the deteriorating condition of the hospitals and seeing his celebrity peer Shaggy stepping up to help one of the most in need hospitals in the Caribbean.

“As a thriving Jamaican who came from nothing to something, I know I had to give back,” Killer said. “I also have a special connections with those two hospitals because not only was I born at Jubilee but in the late 80s, when I got shot, KPH was where they took me.”

Bounty Killer build his career over the past three decades not just as a hardcore gangsta dancehall artist, but also as the “Poor People Governor” a moniker he took on since the 1990s. The deejay says he made the connection to acquire the beds for the hospitals through a close friend who is a medical doctor living overseas. While he didn’t reveal the price tag for the 60 units, we’re told it runs in the millions of dollars. 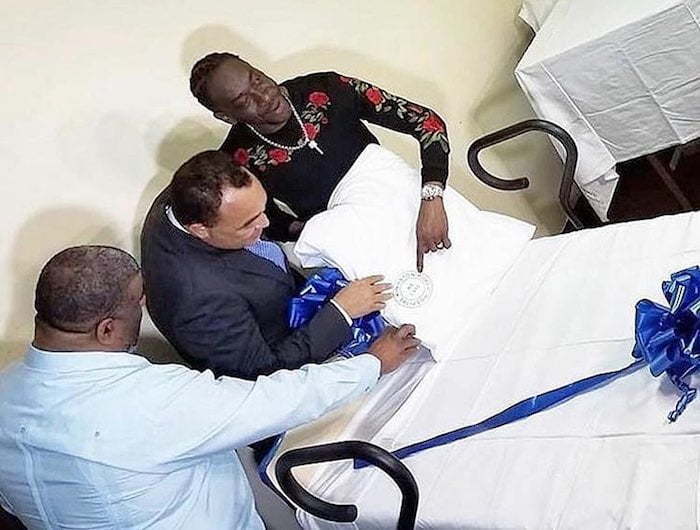 “It did cost a bit of money but I got them into the country hassle-free as I got a waiver from the finance ministry,” Killer added. “We see Shaggy adopting the Bustamante Hospital and if the children hospital is in such need, you can just imagine what is happening at the adult ones. We have to realize that all of us are going to age, so as it relates to the education, security and health facilities, the public needs to help it if they can.”

At a press event at the KPH with the Minister of Health, Bounty Killer further highlight the needs of the hospitals and request more local celebrities and corporate Jamaica to come on board.

Bounty Killer says this will not be the last time he is stepping up to help the hospitals.