Cardi B shot back at Chris Brown insisting that she made Billboard history this week.

This week, the “Bartier Cardi” rapper became only the third artist in history to have their first three entries on the Billboard Hot 100 chart in the top 10 simultaneously, the other two artists are The Beatles and Ashanti. Chris Brown posted on his Instagram yesterday that he and a bunch of other artists have achieved three songs in the top 10 on the chart simultaneously. Breezy clearly misunderstood the difference between having any three of your songs in the top ten at the same time and having your first three songs ever to enter the chart making it to the top ten at the same time.

Cardi B posted a response on Instagram clarifying her achievement for her detractors. “Yall say that I don’t know how to speak proper English, and I say that a lot of yall don’t know how to read,” she said. “Let me be clear! I did not make history for having three songs on the top 10 Billboard Hot 100 at the same time, that’s been done before, more than a few times! I made history for having my first three songs ever to be entered on the charts hit the top 10 Billboard Hot 100 at the same time, and that has only been done three times.” 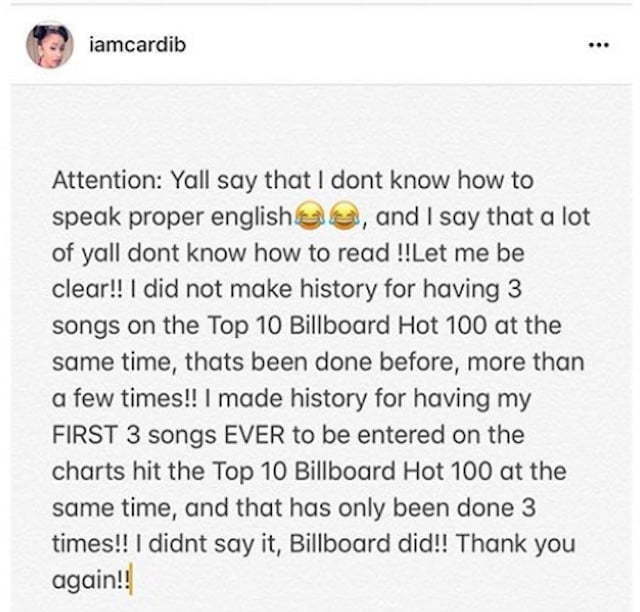 She ended her statement saying, “Respect my sh*t and let me live my best life in peace I just wanna be, I just wanna be, successful.” Cardi B’s breakout hit “Bodak Yellow” was the most streamed single by a female artist last year and since the start of the year, the track is seeing a new surge in momentum, jumping two places on the Hot 100 chart this week to No. 10. Can she repeat the same level of success this year with her pending debut album?