Nicki Minaj and Nas are now officially dating and here is everything that you know to know about their relationship.

Even before they became a thing, rumors of a budding relationship between Nicki Minaj and New York rap legend Nas has been floating around since 2012 and you will soon find out why. Last week, however, the rumors turned into a confirmation after the Trinidadian rapper was spotted locking lips with the rap icon at his 44th birthday party in NYC. Neither of them confirmed the rumored relationship but video footage surfaced of Nas treating Nicki like glazed donuts. Another clip showed them hugging each other and kissing in a corner although they tried to play it off when they realized a camera was on them.

Nicki Minaj cast Nas as her love interest in her “Right By My Side” music video in 2012. The song features a guest verse from Chris Brown but Breezy didn’t play her love interest, Nasir did and that triggered some dating rumors. At the time Nicki portrayed herself as a single woman although she was dating Safaree Samuels at the time. She and Samuels broke up in 2014 before she started dating Meek Mill, who was blamed for the demise of her relationship with Samuels. The Nas dating rumors died down for a while until earlier this year when it flared up again after they were both spotted having dinner at a restaurant in Brooklyn. The PinkPrint rapper has a knack for denying relationships until it all comes out in the open, the same thing happened with her relationship with Safaree Meek Mill, she denied them until she couldn’t hide it anymore.

Nicki Minaj, 34, and Nas, 44, have been dating since May of 2017 according to E! News. The rumors first surfaced when both of them were spotted having dinner at the famous Sweet Chicks Life restaurant in Brooklyn. She posted a photo of the two of them cozying up in the restaurant. “Only KINGS recognize QUEENS. @sweetchicklife has the best food congrats @nas,” she wrote on Instagram. Since May, the dating rumors died down for a bit until last week Monday when photos and videos surfaced on social media of Nicki Minaj and Nas getting cozy at his 44th birthday bash. The couple partied with Alicia Keys and Swizz Beatz who was also celebrating his own birthday which was the day before Nas celebrated his.

In May, Nicki Minaj also sat down for an interview with Ellen DeGeneres where she spoke about Nas and how they had “sexy sleepovers.” “I go to (his house) I just thought him coming to me was too forward,” Nicki said about the Illmatic rapper. “Let me clarify, we didn’t do the.” Ellen then asked her if they did the Nasty and she said, “No, because I’m just chilling right now, I’m celibate. I wanted to go a year without dating any men, I hate men. But I might make an exception to the rule for him.” 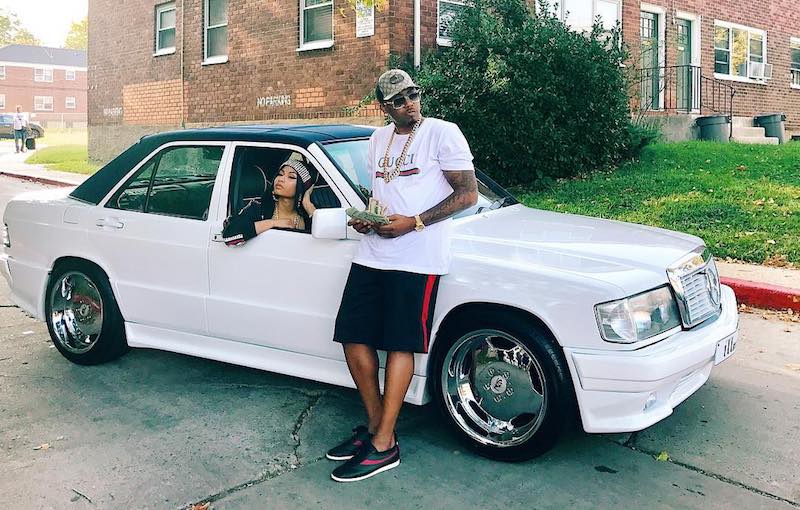 On Sunday, Nas got his classic 1988 Mercedes-Benz 190E and picked up Nicki Minaj in Brooklyn. “Got my Bday 1988 190E Benz & picked up Shorty from Queens! We Out!” he wrote on Instagram. Seems the two also did a photo shoot which kind of make it seems like their relationship is also for publicity. After all, both rappers have upcoming projects coming out this fall.

Nicki Minaj also posted a clip on her IG with the caption, “Nasty Nas hopped out the illmatic ’88 benz tryna holla @ me earlier today in Queens. #GucciDown $54.11’s @nas.” There is no doubt that Nicki and Nasty Nas will be a hip-hop power couple with his credentials as a legend in the genre and she has been making a name for herself as the top female emcee for the last decade.