The “New Flames” singer posted a photo of the model on his Instagram page with a telling caption. “Dat look,” he wrote with a few emojis. She commented on the photo calling Breezy “daddy.” The posts sent off a social media friends with some fans of the singer tagging Karrueche Tran and Rihanna. Vargas has the same photo posted on her IG and Brown’s fans have been busy trolling her with comments about Rihanna and Karrueche.

The two were spotted together at a club in New York City last month and again a few days later hitting up a restaurant in Los Angeles. Brown and Vargas hit up LA hotspot Catch on January 18 but Drake and Jennifer Lopez were reportedly dining there so the pair left within minutes of arrival. On that same day, she was spotted on the passenger side of Breezy’s Lamborghini. 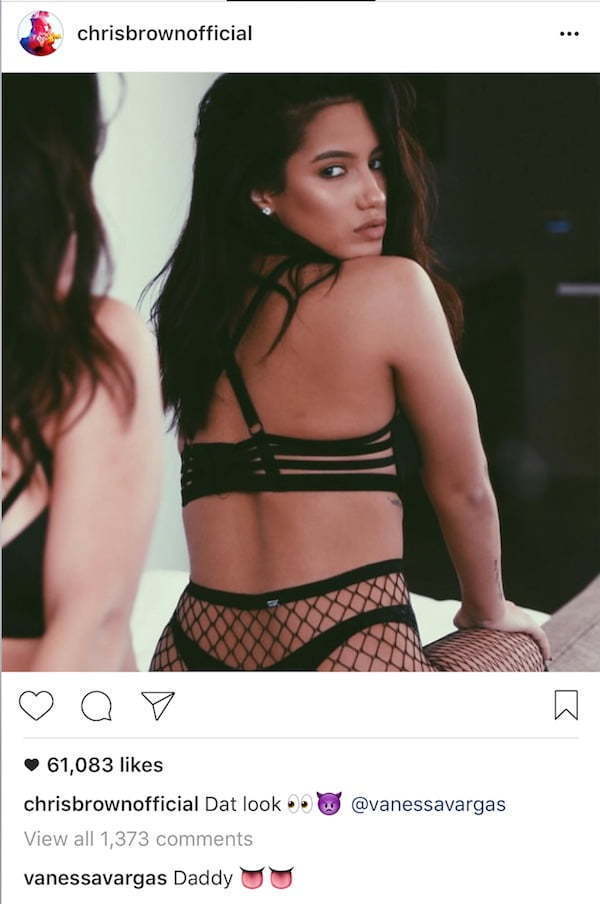 A week before their dinner date in LA Chris Brown and Vanessa Vargas hit up Up & Down nightclub in NYC where Rihanna was partying that same night. Sources told Urban Islandz that it was mere coincidence that they ended up at the same spot, but some partygoers were convinced that the old flames were hooking up once again.

Up until now they were just rumored to be dating but seems Chris Brown is ready to go public with the relationship. This would be his first official relationship since his breakup with Karrueche Tran in 2015 over his love child Royalty. Earlier this week Breezy posted a video telling his fans that he is the ultimate stalker and will not leave a girl alone if he falls in love with her. Karrueche responded to the clip by posting a ton of sexy bikini photos on her Instagram.