Nicki Minaj is dropping some major hints on her upcoming album. The Trini rapper succumb to one fan pressure on Twitter to reveal the initials for her new album which she responded saying “MYOB.”

The true meaning of “MYOB” is not yet known but its a start and we will continue digging to get more information on the project. Nicki Minaj recently revealed that she is single and focusing on her music, making her hip hop’s newest eligible bachelorette. Her fans have been bombarding her Twitter since her announcement about the new album and things seems to be taking shape.

David Guetta, who previously collaborated with Nicki Minaj on the 20015 single “Hey Mama,” revealed during an interview on Facebook Live on Friday that he and Lil Wayne will be on her next project. “I think she’s very very special, we work really good together,” Guetta said. “Plus we have Lil Wayne on top of that.” 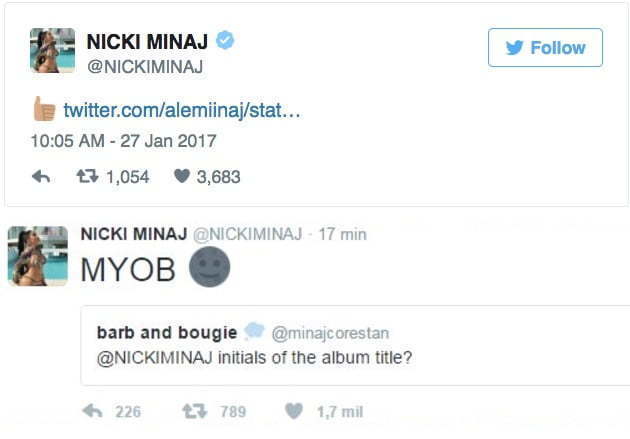 The Young Money femcee has been having a rocky year from her breakup with Meek Mill back in December. She has been keeping a low profile while working her new album which will be the followup to her 2014 The PinkPrint. Her relationship with Meek has been largely blame for her not dropping a new project in over two years.

There is no release date or official title for Nicki Minaj new album, but it likely will arrive sometime this year. Her labelmate Drake is dropping his new project More Life on Saturday, while his label boss Lil Wayne announces a couple new projects coming this year including his long awaited Tha Carter V.

Minaj is featured on the soundtrack for the upcoming movie 50 Shades Darker on a track with Nick Jonas. The “Truffle Butter” spitter revealed on Twitter that she has something special for her fans on a killer verse.

I put a special surprise on the #50Shades verse that will make my core fans VERY happy. ?