Meek Mill and Keke Palmer were spotted hanging out in Atlanta on Saturday fueling some dating rumors.

Both Meek and Keke are dealing with their own drama this week. The Philly rapper deleted his Instagram account after fans criticized him for sneak dissing Nicki Minaj and Safaree Samuels. The actress/singer is currently locked in a bitter feud with Trey Songz after he premiered his new music video “Pick Up The Phone” using her image and likeness without permission.

Meek Mill, who recently broke up with Nicki Minaj, was spotted with Keke Palmer at Atlanta’s Lenox mall over the weekend. Instagram blog TheShaderoom posted the photo with the caption “One of our #Roommates spotted #MeekMill and #KekePalmer hanging out at Lenox in #ATL.” 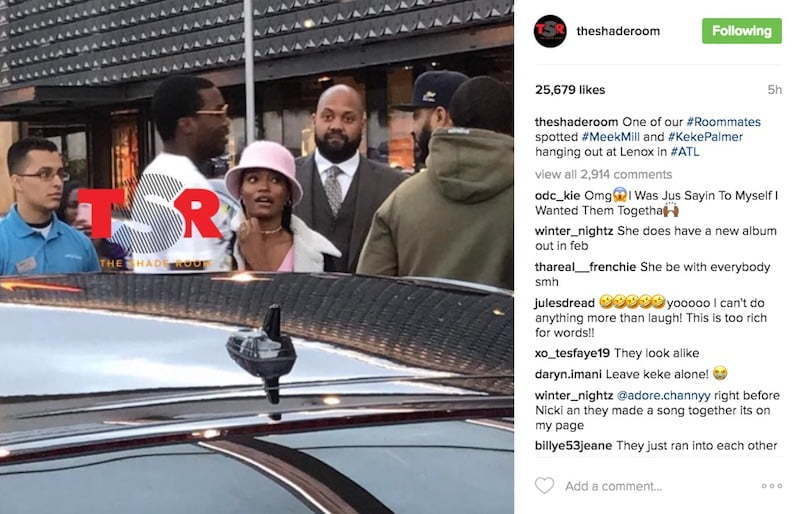 The Dreamchasers emcee and Palmer have an history. Back in 2014 they were rumored to be dating and she actually addressed the reports in an interview. “I wasn’t surprised when they say who would be an astrological match for me it would be Meek,” she said. “First of all my producers knew about the rumors and stuffs like that, but then also on top of that astrological he and I are a match and I am the type of person to be like we don’t need to beat around the bush, am not into passive aggression so am like I know we all thinking about the Meek Mill rumors and it doesn’t really matter to me because he and I are very cool, it is what it is and its just fun.”