Taylor Swift has finally back down and apologize to Nicki Minaj for calling her out on Twitter.

The Young Money rapper went on a Twitter rant about the MTV Video Music Awards snubbing her “Anaconda” video for Video of the Year.

“If your video celebrates women with very slim bodies, you will be nominated for vid of the year,” Nicki wrote on Twitter.

Seems Taylor Swift thought that Nicki Minaj was talking about her and immediately fired off a tweet in response.

If your video celebrates women with very slim bodies, you will be nominated for vid of the year ????????????? 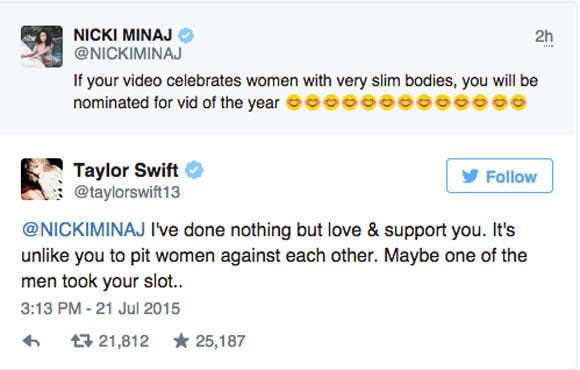 Swift did got a lot of bashing from some quarter of mainstream media and some big name celebrities. She finally bow out of her stance and issued on apology via Twitter to Nicki.

“I thought I was being called out. I missed the point, I misunderstood, then misspoke. I’m sorry, Nicki,” she wrote on her Twitter timeline.

Nicki Minaj accepted her apology and the entire pointless beef was quashed.

I've always loved her. Everyone makes mistakes. She gained so much more respect from me. Let's move on. https://t.co/mx9pfIdnzT