So Nicki Minaj ex-boyfriend Safaree Samuels won’t be able to walk on the red carpet at Sunday’s BET Awards.

Some of you might be asking why would he be walking the red carpet anyway. But let’s remember that he use to regularly make those appearances with Nicki Minaj.

Yesterday, Safaree, aka Scaff Beezy, went on a Twitter rant that he was banned from BET red carpet.

“So Bet told my publicist im “Banned” from Bet Red carpet, hmmm wonder why.. dnt recall a situation occuring with them but hey #itiswhatitis,” he wrote on Twitter.

So Bet told my publicist im "Banned" from Bet Red carpet, hmmm wonder why.. dnt recall a situation occuring with them but hey #itiswhatitis

The Jamaican-born rapper clearly felt some type of way because he also publicly dissed BET and also confirmed that he wrote rhymes for Nicki Minaj.

“Tell em b***hes blow me lance stephenson … and to outsiders dont say anything about me quoting that… i wrote it!! have a goodday!” he added on Twitter. 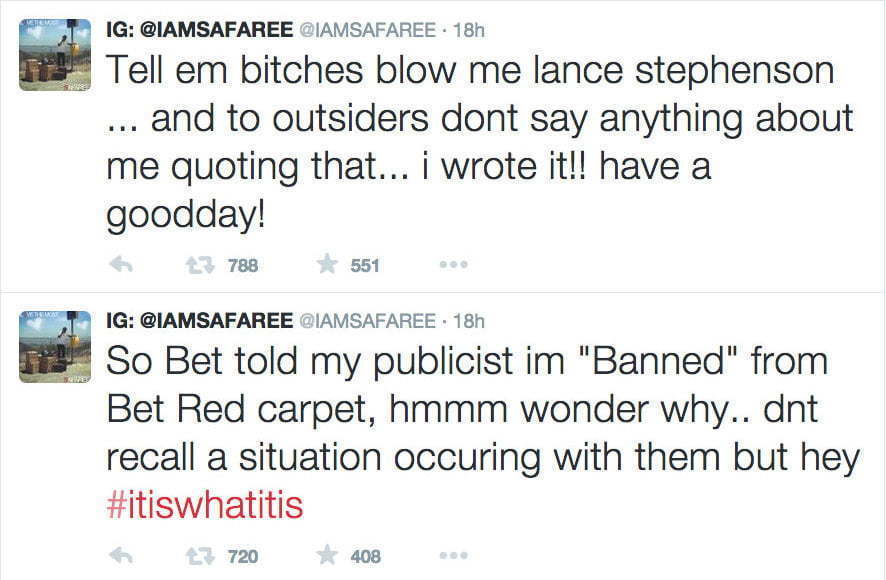 Safaree also posted a video on Instagram showing his fans what he was doing when he learned about the ban.

Nicki Minaj will be performing at the 2015 BET Awards later today at the Nokia Theatre in Los Angeles.

The ceremony will be broadcast live on BET starting at 8 p.m. EDT.