Very soon every artist will be very careful about what they write on Twitter so that they won’t offend another artist fan base.

Ever so Nicki Minaj, Beyonce, or Rihanna fans go on the attack to take down another artist for shading their idol.

“I’m A walking testimony! To those who was told they were talented but didn’t look the part! be YOU there’s many who can relate 2u,” Missy wrote on her Twitter timeline before deleting it.

The “Work It” rapper also responded to a few of Nicki Minaj fans who were up in their feelings about her tweet.

“I have artist on my TL who I mentor giving advise that was giving to me when I 1st started as a artist smh my tweets r 2 uplift,” Missy tweeted.

“Lets say this one time & time I’m only! I mentor unsigned artist my I don’t throw shade at artist be clear,” the veteran rapper wrote on her timeline. 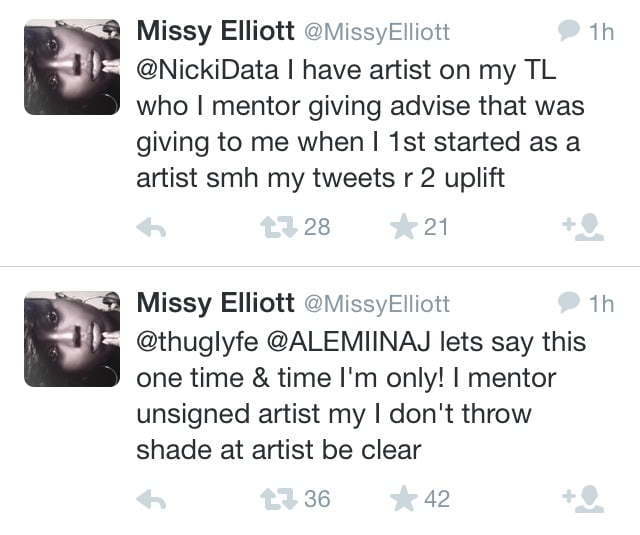 Missy later added these tweets to her TL.

Elliot has since deleted all those tweets. In today’s age of social media it’s hard for artists to express themselves without being accused of dissing another artist.

Check out some of the tweets from Nicki Minaj fans.