Nicki Minaj has collaborated with Beyonce on “Flawless (Remix)” and now again on a “Feeling Myself” featured on her new album The PinkPrint.

Nicki Minaj debut the single on her Vevo channel yesterday and already it is garnering a lot of praise.

Speaking with TIME, the Trinidadian rapper opened up about working with Beyonce, who is one of the boggest pop stars of all-time.

“When I did ‘Flawless,’ she said that she would do something for The Pinkprint,” Minaj said. “I was ecstatic. She had ‘Feeling Myself’ — she wanted to know how I felt about it. I said, ‘I love it.’ I knew girls were going to be posting pictures on Instagram saying ‘#feelingmyself.’ I told Beyoncé that. I was like, ‘You already know what’s going to happen.’” 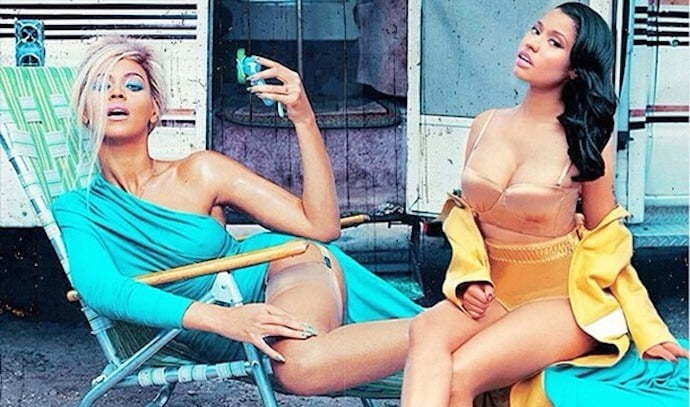 The “Feeling Myself” rapper said that they wanted to recreate the magic from “Flawless (Remix)” which was a hugely success single.

“There was pressure,” Minaj added. “‘Flawless’ impacted so hard. But people seemed to love ‘Feeling Myself,’ too. I was excited that we got another one. With ‘Flawless,’ it makes girls feel good about themselves. You could say, ‘I’m feeling myself’ or ‘I’m flawless.’ It’s something every girl wants to say.”

Nicki Minaj also said that there are no videos in the works for “Flawless (Remix)” but the big question is will wee be seeing a video for “Feeling Myself.”