Nicki Minaj and her ex-boyfriend Safaree Samuels are both going through heartbreaks and torture over their breakup and it’s being aired out on Twitter.

Last week the Young Money rapper broke down in tears in an interview with Angie Martinez while speaking about her breakup.

But things started to get ugly for the longtime couple when Nicki Minaj started to make some scathing allegations about Safaree Samuels trying to blackmail her.

“Anything you don’t appreciate will be taken. God sees your ungrateful evil soul. I gave and gave and gave. Threatening me? Blackmail? Jump,” Nicki wrote on Twitter. 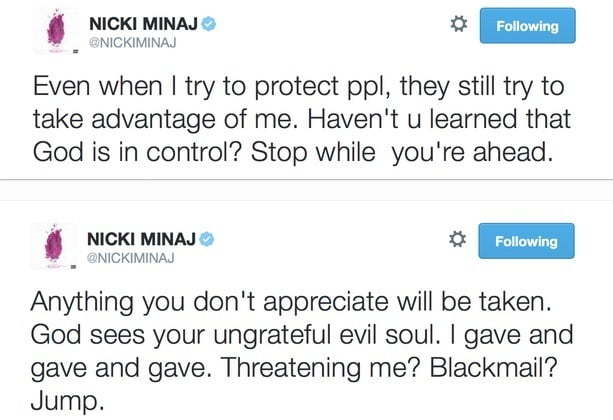 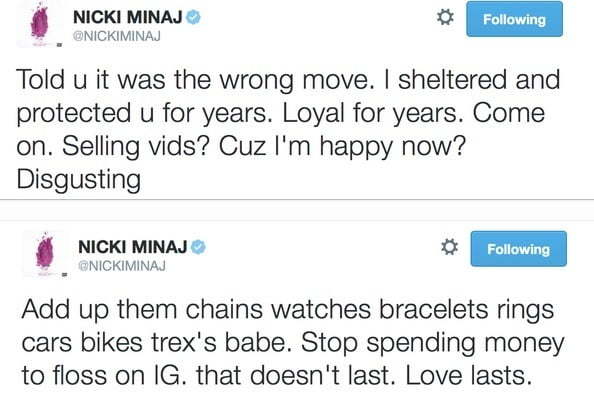 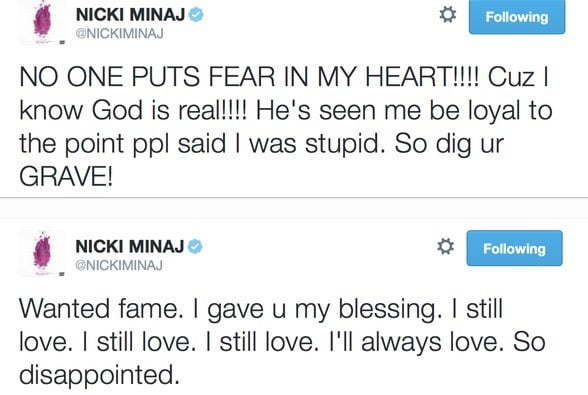 Nicki Minaj later deleted those tweets and says sorry to her fans for her rant.

I'm sorry. My fans know this isn't me. Hate this. But I'm human. I do so much. Too much. No man would have stayed loyal in this game like me

Safaree has since responded on Twitter denying that he tried to blackmail Nicki Minaj.

“its so ridiculous that instead of hitting my phone u come on here.. i dnt kno what your talking about at alll!! i would never do that!!!,” he wrote on Twitter.

its so ridiculous that instead of hitting my phone u come on here.. i dnt kno what your talking about at alll!! i would never do that!!!

im dissapointed too.. ur doin something to me publicly that the public doesnt know your doing but your the victim cuz ur famous.. smh

and speaking to some1 about pub and splits isnt blackmail. stop looking for pitty.. u handle your buisness why cant i ?

were not 2gthr nemore im fine with that.but im not goin back m forth w/u on here.i cant believe were doin dis. we use 2 laugh at ppl 4 this.

i jus got off the phone with your mother and come off to this..pls stop. we dnt have to ever speak again in life but doin it like this….no

According to Safaree, their split was never about cheating, it was more about respect, which Nicki Minaj never had for him.

and its not Bout fame its about respect and youve had 0 for me the pass few years.the 0 respect u had for me at home had nothing 2do w/music

you all see a public figure. I'm with the real person. we will always love each other no matter what. peace n thats the last ill say bout it

Cheating was never the issue. ppl grow apart and it is what it is.. and thats all ill say about that.. a lot can happen and change in 12 yrs

it ruins and breaks relationships that were once made of gold. everyting is done for attention for a few days then its on to the next 1.