Christina Milian love Lil Wayne and she want the whole world to know that.

In case you’re wondering no she didn’t upload a photo on Instagram with those exact words. But what went down is equally shocking.

Today one regular (non celebrity) chick uploaded a photo to her Instagram page of some famous women that have dated Lil Wayne. “These h*es love Wayne!!! #IJS #AllHisBabyMommas #ChristinaAndNiveaBothHaveBabiesByDream #TheCircle,” she captioned that photo. 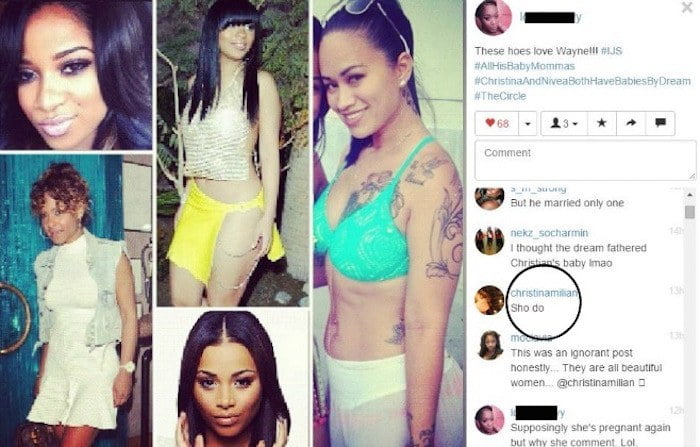 “Sho do,” Milian wrote in the comments. The female tried to then backtrack her comments saying she didn’t mean to offend anyone but the damage was already don.

Christian Milian fans on Instagram went in on her calling her all the degrading things you can think of and a lot more.

The female even tried to calm the storm with another Instagram post that only made things worst for her.

“Post made #TheShadeRoom quick. Probably only because @christinamilian commented but now my neck is being chopped over it. Simply because I used the word hoes instead of females. Lmao. I really didn’t mean they were “hoes” but okay. Wayne refers to all his females as hoes but that dude is loved. Feeling like Wendy Williams right now. Lol. People claiming I got 5 seconds of fame. Lmfao. It’s IG. This ain’t sh*t.”

The R&B singer has been rumored to be pregnant with Lil Wayne baby. So far non of them have confirmed those rumors.