Never get a tattoo you will most likely regret such as a tattoo of a girlfriend or spouse.

Nick Cannon learned the hard way because now he has to be covering up that giant Mariah Carey tattoo he got when the two got married.

Now that Cannon and Carey are getting a divorce he is faced with a tough decision on whether to laser off the tattoo or cover it with another tattoo.

While on the red carpet for the premiere of the film Addicted in New York, Nick Cannon spoke out about covering up the Mariah tattoo.

“I’m just taking everything one day at a time and just being the best person that I can possibly be at the end of the day,” Nick Cannon said.

Nick Cannon was spotted out at L.A.’s Studio City after a workout session earlier this week sporting a new crucifixion tattoo covering the Mariah tattoo. 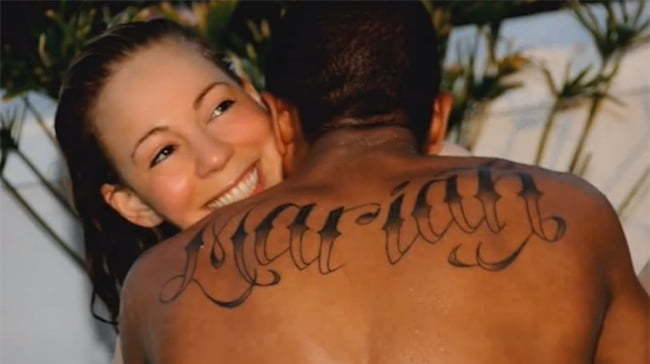 But he says it is unfinished.

“It’s not finished yet,” Cannon said. “It wasn’t supposed to be revealed yet… I didn’t know they were there, that’s how sneaky paparazzi are… I had just gotten it done, it was painful… It hurt a lot and I’m still not finished, I’m still probably like six more sessions away.”

The America Got Talent host also says he and his soon to be ex-wife are still on speaking terms.