But that tweet quickly vanished as fast as it was sent out because her fans went in on her about it.

Rihanna did not offer an apology for the tweet but she replaced it with a more neutral statement about the ongoing conflict between Israel and Palestine.

“Let’s pray for peace and a swift end to the Israeli-Palestinian conflict! Is there any hope?” Rihanna wrote.

Let's pray for peace and a swift end to the Israeli-Palestinian conflict! Is there any hope?…. pic.twitter.com/jHD56KXkcu

Sources close to the Bajan pop star told Urban Islandz that she accidentally sent out the tweet after reading an article about the conflict.

“Rihanna is in no way taking sides in this global political issue, the tweet was an accident and it was removed,” the source told us.

“Rihanna is not pro Palestine or Israel, she is pro peace and she was just simply using her celebrity power to spread the word of peace,” the source added. 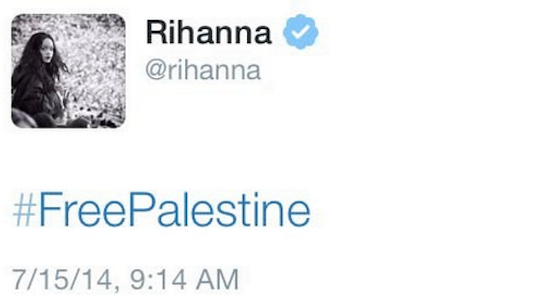 Rihanna is back in the United States from a fulfilling trip to Brazil last weekend for the World Cup finals.

The “Diamonds” singer posed for photos with soccer legend Pele before celebrating with Germany for winning the covetous World Cup title.