On this day February 20, 1988, Robyn ‘Rihanna’ Fenty came into this world in Saint Michael in the tiny island paradise of Barbados.

Some 16 years later Rihanna began her journey when she auditioned for Jay-Z, who instantly signed her to Def Jam.

See also: Rihanna, Chris Brown Relationship On The Rocks Because Of Drake

Rihanna’s first hit single was “Pon De Replay,” off her debut album Music Of The Sun. The single was released on one of the most popular dancehall riddim’s of all time, the Diwali Riddim, produced by Steven “Lenky” Marsden.

Today Rihanna is at the top of pop music with seven albums, seven Grammys, and 12 number one hit singles under her belt. She also already made her big screen debut.

Rihanna currently ties with Madonna and trailing only behind Mariah Carey as the female with the most number one singles of all time on Billboard Hot 100 chart.

Gossips and chatters aside, today we salute home girl Rihanna as she celebrates her 25th birthday.

Sources close to RiRi told UrbanIslandz.com that she is currently in Hawaii with her family and friends celebrating her big day.

“Robyn is out in Hawaii with her peeps to celebrate her birthday,” the source said. “All her friends and family are there because this is the last time she will get to spend with everyone before she goes on tour.”

There is also a rumor spreading like wildfire claiming that Chris Brown will be proposing to her at her birthday party.

Yesterday RiRi upload these photos on her instagram of her showing off her toned body in a bikini while smoking a blunt. 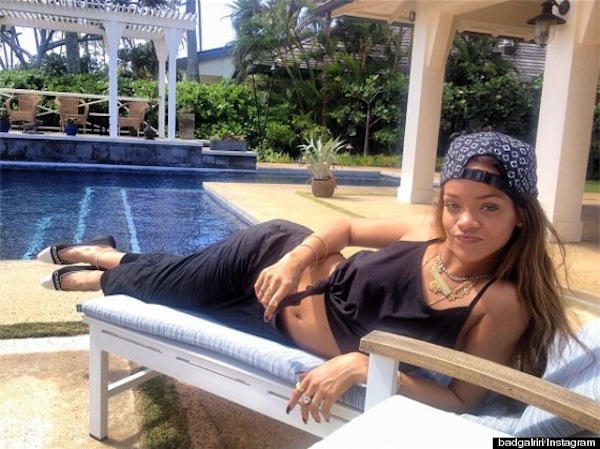