At an event held at Yerba Buena Center for the Performing Arts in San Francisco, California, Apple also revealed the new iPod and a redesign iTunes.

The new iPhone 5 will boast Apple’s new operating system IOS 6 and a thinner lighter frame with larger screen. No doubt Apple is looking to raise the smartphone bar once again with the iPhone 5.

See a list of new features on the iPhone 5.

-Be on A 4G LTE Network
-Have a 2x Faster CPU
-Be 22% Smaller
-Have an 8-10 Hour battery life
-Have a 25% smaller 8 megapixel camera
-Have 44% more color saturation than 4s
-Offer FaceTime over the cellular service
-Have a new connector that is 80% smaller
-Has integrated Tom Tom into it’s GPS capabilities
-Offer Panorama – a new feature that allows you to take massive widescreen pictures
-Be priced at $199 for 16GB up to $399 for 64GB
-Have a release date of September 21st with a pre-order beginning on Friday September 15th
-Siri now knows sports, can suggest movies based on Rotten Tomatoes, and update your Facebook status
-Be available in both black and white
-Offer 3 Mics; One mic on the front, one on the bottom and one on the back. 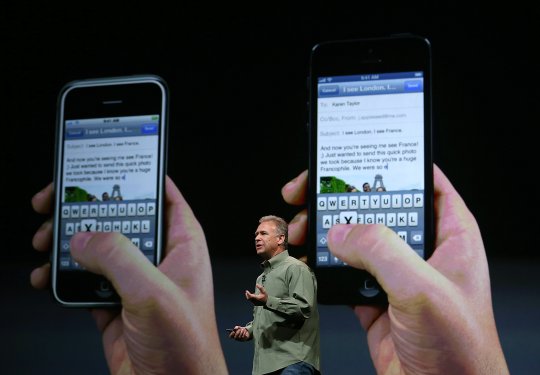