AGSelectPR, Kingston, Thursday, May 31, 2012: It took ten tries, but Trinidad designer Ryan Chan can finally call himself a Mission Catwalk challenge winner. Episode ten of the Caribbean fashion reality series saw Ryan along with five other designers were creating a prom dress for a high school girl-a test not only of their design skills but their ability to work with a client.

“I made sure to ask my model what her favorite colour combination. She, without hesitating, answered “pink and black”, also my two favorite colors! I created a pink dress with peau de soie fabric and used black accessories. I also kept her age in mind and, modernized the corsage by using a black rhinestone encrusted appliqué, which I thought gave her some attitude but yet kept it funky and fun- a punk rock princess!”

Alvina Bryan was the lucky model who in addition to keeping her Ryan Chan design, won a $10,000.00 gift voucher to shop at Xtra’s.

For him, this win is especially satisfying as he has been in the bottom spot for the last four episodes. He did start the series on strong footing, having placed in the top four ranking in episodes two to four. Whether he maintains his winning stance remains to be seen as there is one more challenge before the battle of the top three at Caribbean Fashion Week which takes place at 7PM on Friday June 8.

For now, the judges were pleased with what they saw. This week the regular judging panel of Keneea Linton-George, host and executive producer of Mission Catwalk; Novia McDonald-Whyte, associate editor lifestyle and social content at the Jamaica Observer and menswear designer Carlton Brown were joined Sandra Glasgow a director at the National Commercial Bank (NCB) of Jamaica. Her company contributed $250,000 worth of literary items to the Mission Literacy programme a partnership between NCB Foundation and Mission Catwalk. The items were divided amongst the top five designers who presented them to five Kingston basic and primary schools: Bradford Basic, Victory Basic, St. Albans Primary, His Majesty Basic and Boys Town All Age.

Jamaica’s Janel Jolly was ranked as the lowest scoring designer and she was eliminated. Though she was in the top scoring designers on episodes one, two and six, she was safe throughout the series. Five designers now remain. They are Crystal Powell and Gregory Williams of Jamaica, Kerin Scott of Barbados, Belize’s Rebecca Stirm and Ryan Chan of course.

Tune in to Television Jamaica every Tuesday at 8:30 PM for the newest episode from Mission Catwalk Season 2, presented by NCB, Supreme Ventures and Digicel. Each week’s episode repeats at 5:30Pm on Thursdays. Mission Catwalk can also be viewed on local stations in Barbados, Belize, Grenada, Guyana and Trinidad and Tobago. Viewers around the globe and watch the online stream at televisionjamaica.com/livetv.aspx 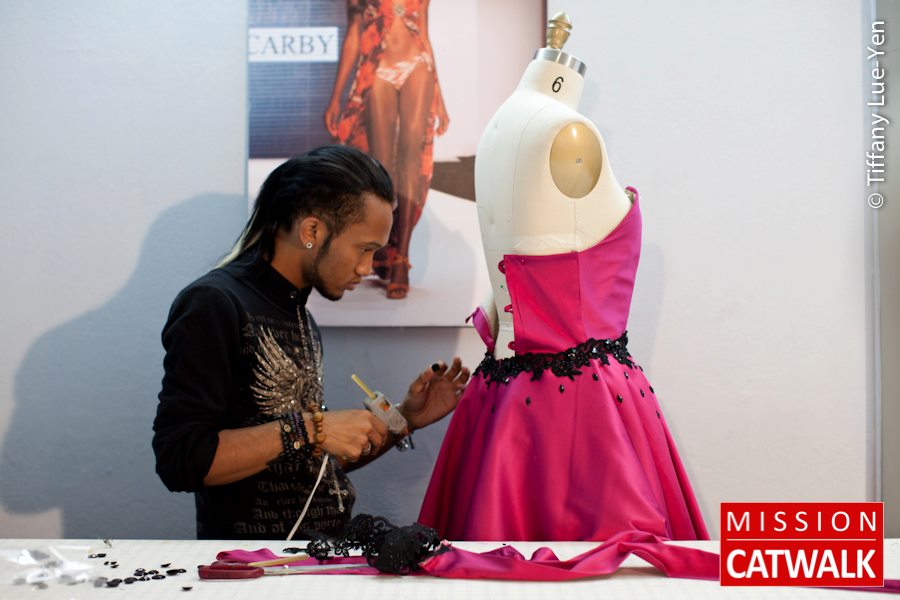