Dancehall heavy weights Bounty Killer and Vybz Kartel are both not new to controversy, as the two deejays who are engaged in a bitter beef had to run for cover at the popular stage show “Follow DI Arrow” last weekend.

During the wee hours of Sunday morning during the Alliance general’s performance Bottles started hurling on stage when the deejay criticized a newspaper report of a possible clash between himself and Gaza Empire leader Vybz Kartel.

Although the Killer returned on stage moments later to stamp his authority, he again had to run for cover as stones, bottles rain onstage, as well as, sounds resembling gunshots rang out.

The Gaza owned Vybz Kartel was not spared when he entered the stage either. The Dancehall Hero who was looking to save the day, had to run for cover seconds after entering the stage. 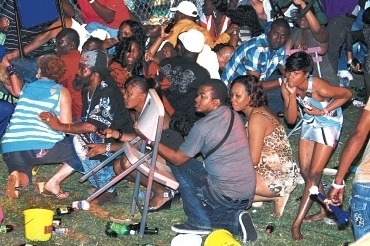 The popular show, which was one of the highly anticipated shows starting out the year, came to a chaotic halt, with several injuries but no reports of any life threatening. Several fans could be seen crying, and some with blood stain on their cloth and open wounds.

Not even the shows MCs were spared, as Kingsley “Ragashanti” Stewart and DJ Sunshine had to took cover when bottles start to pelt the stage.

The show’s main sponsor ‘Magnum’ condemned the incident in a statement: “The 2011 staging of Magnum Follow Di Arrow started with ‘positive vibes’, leading to several excellent performances, supported by equally good production. However, the ‘positive vibes’ were shattered when an unfortunate incident led to the end of what could have been the best Magnum Follow Di Arrow to date.”

Some patrons told Urban Islandz that the bottle was as a result of no clash between Bounty Killer and Vybz Kartel.

“People di a come out fi si Kartel and Bounty clash, so when Bounty seh nutten no go so, some fans get angry and start fling bottle,” one patron told us on Facebook.

Peep a video below of Bounty Killer performance.