It’s no joke when they say Tattoo is very addictive and once you start you can’t stop.

Gaza general Vybz Kartel has gotten a new tattoo as if he don’t have enough already. The new tats covering the Di Teacha fingers are very suggestive of his rumored affiliation with the cult.

For some time now Kartel has been speculated to be a member of the Freemason society, an allegation the artist has yet to deny, but may confirm in numerous of his songs.

See the tattoos below and tell us what you think. 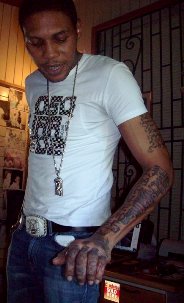