Since winning Digicel rising star in 2007, singer Romain Virgo slowly becomes a mega Reggae star right before our eyes. It would seems as everywhere the young star goes he pulled a large crowd of fans with him.

We say him tear down Reggae Sumfest and several other shows in Jamaica and the US, the ladies simply cannot get enough of this kid. Last week the Virgo was spotted in his home town Ocho Rios selling newspaper on the busy streets. A fan told us that the moment he was recognised a huge crowd swarm him and the newspapers were done in a matter of minutes. The source told us that Romain Virgo literally cause traffic to come to a stand still.

This lead us to believe that Romain Virgo is the Justin Bieber of Jamaica.

If you have anything to sell downtown Kingston or Mobay let Romain Virgo do it for you. No joke this kid is more popular than some seasoned artists in the business long time. 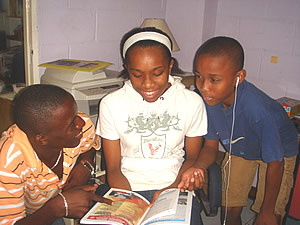