Ishawna delivered a controversial performance on night one of Reggae Sumfest, where she performed her single “Equal Rights” and has once again stirred major controversy with her antics on stage.

The singer is well-known for her controversial style and brought the same to the stage, much to the chagrin and displeasure of dancehall icon Bounty Killer, who walked out of the event while she was performing.

During her performance, Ishawna displayed lifesize cutout figures of Bounty Killer, Jamaica’s Prime Minister Andrew Holness, and Health Minister Dr. Christopher Tufton, which were part of her set. The cutouts were covered with a black cloth which she revealed individually during her performance.

It was immediately obvious why the cutout of Bounty Killer was chosen because as soon as the track began to play, Ishawna gave the cutout a sexy rub down.

Ishawna was previously warned by Bounty Killer about her song in 2017 after she released “Equal Rights,” in which Bounty Killer issued his disapproval. At the time, the dancehall legend did not co-sign Ishawna promoting men giving women oral sex, and he had made it publicly known.

Ishawna, however, in true Sumfest style, brought the vibes and delivered an outrageous performance as she gyrated on Bounty’s face on the cutout, symbolically receiving oral sex from dancehall legend.

While singing about wanting to be sucked out like a ‘bag juice’, Ishawna did the unthinkable as she flung Bounty’s cutout on the ground and proceeded to “boom” close to his face while patting her vagina.

Ishawna took the Reggae Sumfest stage in the early hours of Saturday morning in a sexy nude leotard with a long Cleopatra-style silver wig. Her sexy figure was accentuated with glittery stones and see-through shiny thong panty as she did the Megan Thee Stallion style wine over the cutout. 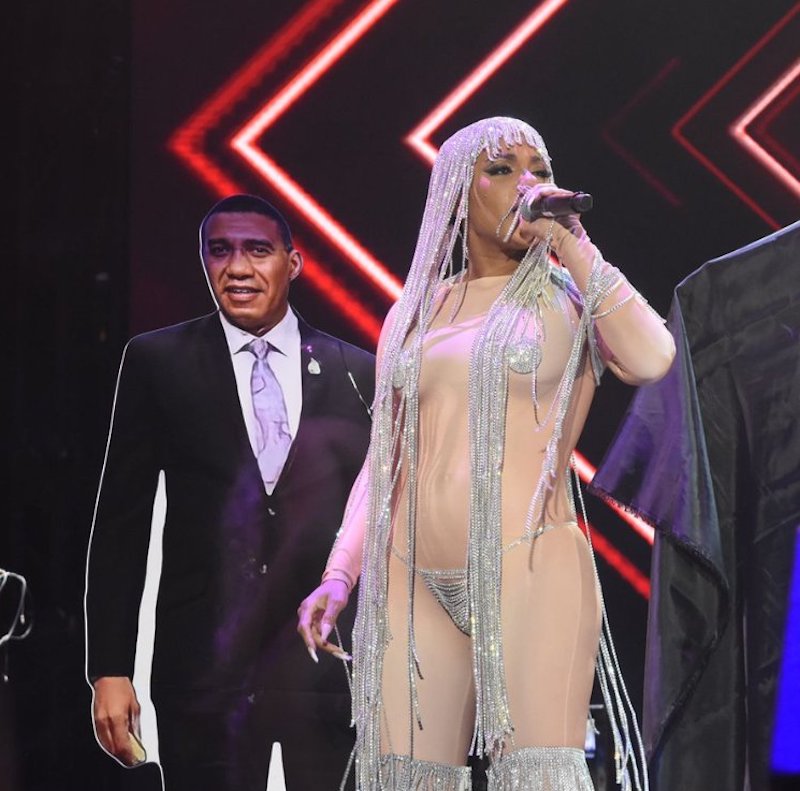 She also ensured that Dr. Tufton’s cutout got a dose of the same treatment. Tufton is regarded as a sex symbol in the dancehall space due to his alleged cheating scandal last year and earning him the title of “gyallis .”Prime Minister Andrew Holness’s cutout also copped a couple of whines from the artist as she bent over and backed her shapely behind on it.

Patrons at the event reacted crazily at Ishawna’s antics, but Bounty Killer was not a fan of the entire thing, and he, along with his entourage, were seen leaving the venue as Ishawna continued her outrageous performance.

According to the Jamaica Observer, the Poor People General immediately left the event even though the show continued.

Ishawna also performed her recent hit “Brace It” with Ed Sheeran, which is getting very good airplay and has put her again on the music map after a hiatus over the last two years.

In the meantime, Bounty Killer, who performed at Sumfest earlier in the night as part of the festival’s tribute to Dave Kelly, has not directly responded to Ishawna.

He, however, shared on his Instagram a parody of a comedian’s response to her called ‘Bounty’s Diary,’ which sees the comedian mimicking Bounty’s possible response.

The artist did not share a caption to the video, but the hilarious response said that Ishawna did not have a tune that captivated the crowd, so she “tun up her pum pum powers. Ishawna mi nuh want nyam nothing from you even if it cook”, the comedian mimicked Bounty’s possible response.

Ishawna and Bounty Killer never had bad blood until 2017, when he spoke out against her song.

“[Ishawna] cyaah sing tha song deh at this show else mi ago rush har Nuh kitten or Catfish can nuh bloodclaath bother come bcuz that cyaah sing else she cannot be on no more shows with mi either bcuz mi nuh sing fi bowcat or bowfish,” Bounty Killer wrote.

“Equal Rights” is a remix of Ed Sheeran’s “Shape of You,” and it is the reason for her successful recent collaboration with Ed Sheeran, who said earlier this year that he loved the remix so much he had to work with the artiste.

In the meantime, fans online also reacted to Ishawna’s performance.

Other fans created an uproar over her performance, calling it disrespectful. “Ishawna, know she nuh supposed to mess with the general enuh, if a hot boxx reach har she can only blame herself,” one fan said.

“Just wondering if we would react the same way if a male artist used cutouts of female artists and simulated FORCED sex acts on them,” another added.

“He’S thE pRime MIniStErrr… SO WHAT?! SO F***ING WHAT?! Inflation thru the roof, poverty crisis, environmental crisis, mismanagement of resources and blatant disregard for the same people who put him there and a Ishawna unu have energy for?” another said.

Meanwhile, Ishawna responded to critics on Saturday afternoon, particularly those who felt she disrespected the politicians by using the cutouts.

“I sat on a cardboard box,” the Jamaica Star reported. “It’s all just entertainment.”

“If Andrew Holness or anybody war me bout dah cardboard deh yuh see… address Donna-Lee [Donaldson],” Ishawna said about the missing 24-year-old influencer who was last seen at her boyfriend who is a policeman’s house.

The policeman and his baby mother, who is also a police officer, have been implicated, and they have since both lawyered up as they refuse to cooperate with the police. Jamaicans watching the case have accused the Police force of being corrupt and failing to act quickly in finding Donaldson. Damning voice notes have also implicated senior officers working in the case, suggesting that the suspect is being allowed to interact with evidence and possibly affecting its integrity.

“It’s sad and depressing that particular case; I have a lot to say about it because I don’t believe anything is being done. It should be addressed publicly by public figures,” she said as she waved her hand, hinting at Tufton and PM Holness.

“It’s swept under the rug and it just shows that the system needs to be…dem need fi fix it. Right now, we can’t make people feel like it’s ok to kill someone or do whatever and do whatever and get away with it, this has to set an example out of this, everybody is watching,” she concluded.

In his response to Ishawna’s performance at Reggae Sumfest, Bounty Killer shared a video of Dr. Ledd addressing the situation.

“We Jamaicans likes to take bad things and make jokes but when bad things happens do we find it funny? Thanks to growth and maturity, so at this age I only Act and not React,” Bounty Killer wrote. “Jamaicans y’all says how we rate the general for his contributions to the poor and the development of other artiste etc. Then y’ll sat there laughing how a little fly batty pissen tail dancehall mattress witch styled me right here a Jamaica who claimed them love and rate me. That’s why I had ntn to say I leave y’all to God and Time away with my ignorance and welcome my intellect just watch tha style yah Desperation has one Destination downward spiral.”

In his videi, Dr. Ledd defends Bounty while chiding Ishawna for provoking the dancehall legend. “Everyone knows what Bounty Killer stands for, and Ishawna is allowed to exercise her art. But not while provoking people and creating problems,” he said.