Boosie Badazz is finally sharing details about his ongoing dispute with artist Yung Bleu who was previously signed to his label and appeared to have broken away from their deal.

Yung Bleu had signed to Columbia Records through Boosie Badazz’s label, Bad Azz Music Syndicate a few years back before he broke into the mainstream music market.

However, in recent weeks, it appears that the relationship between the artists has broken down, with Boosie now alleging that his own brother had a hand in poaching Bleu and they are both allegedly trying to cheat him out of millions owed to him from his contract with Bleu.

Earlier this week, Yung Bleu went off on a rant as he called out Boosie for insinuating that he had invested in him only for him to leave.

“I put millions in my self? INVESTMENTS! Why would I let a N***a take millions from me? I tried to make millions with u, and u ignored my vision! treated me like a lil dog! Came thru every time u needed me! I repoed your brand all over the world all on national tv, every interview. Every show! Can’t believe u keep sh*tting on me in these interviews like u ever spend a dollar on me!” Bleu said about an interview Boosie did with Vlad TV.

“Like u gave my anything when I signed! Not 1 dollar bro! Never paid for 1 video, 1 marketing plan. I never told the world that ! I always gave u praise. But u sh*t on me in interviews? Mane,” Bleu said in the lengthy post. 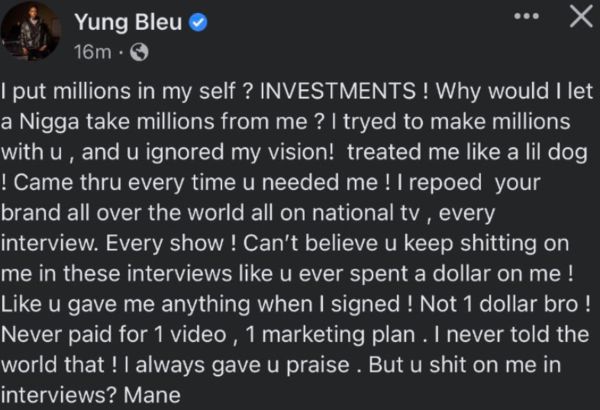 Yung Bleu was responding to comments Boosie made about him in a Vlad TV interview released days ago.

“Nah, I gotta take everybody to court,” Boosie said when asked about the issues with Bleu. “I gotta take everybody to court. Yung Blue ain’t really in it. It’s just the people who all was behind it. People did some messed up business, bro, and it’s coming back, it’s gonna come back to haunt everybody, bro. I just was f*cked over, bro. But I got it. Straight. I don’t really blame Bleu.”

On Thursday, Boosie dropped a bombshell that his own brother was allegedly in collusion with Bleu to forge his signature to steal his company, and now he’s suing a number of people, including labels working with Bleu.

“My brother is a thief who forged my signature with blue on side him n tried to take me off my company but it didn’t work ??zHim blue empire universal everybody was snakes .he’s also listed as a writer n over 60% of Bleu catalog (so who writin the music).They mad they gotta pay,” Boosie said in a tweet.

My brother is a thief who forged my signature with blue on side him n tried to take me off my company but it didn’t work ??zHim blue empire universal everybody was snakes .he’s also listed as a writer n over 60% of Bleu catalog (so who writin the music).They mad they gotta pay

Vlad TV also dropped a snippet from Boosie’s earlier interview where he went into detail about his relationship with Bleu and what’s going on.

“I want my fans to still support him because you know he not to total blame for this sh*t, he has parts in it but he not the total blame,” Boosie said as he shared that he and Bleu had a conversation where the “You’re Mines Still” artist offered him $2 million to settle the matter.

“They see this sh*t is real, I got a real shark lawyer, they see this sh*t real, if a judge see this what has been done to me, he even tried to take me off the LLC of my own company. you know but you need two signatures for that. When a judge sees what has been done to me, he’s gonna be pissed off bro because..man this is wrong bro, they need to cough up that money…they need to go on make me a proposal you because I don’t wanna feel like I’m holding nobody career up but I just can’t bend over, I can’t just let them take my money,” Boosie said.

Boosie Badazz said this is his first time doing this, and according to Vlad, Boosie has already experienced financial loss with some artists he signed in the past.

Boosie added that despite everything, he still wanted to see Yung Bleu be a successful artist.

“I think Blue was sucked into the trap and he went right along with it and it wasn’t a good decision by them and I wish him the best you know I ain’t want this to be a really big thing because I was really trying to be about my crown as a CEO, I’m trying to build up my crown as a CEO and as an artist it’s Bad Azz Entertainment.”

During better times, Boosie and Bleu shared a good relationship with the latter once praising Boosie for being there for him.

“Boosie supported me from the jump,” he said and noted that he was grateful to Boosie for being the first person to believe in him and gave him an opportunity.

At the time he noted that his and Boosie’s relationship transends business into family. Bleu called the Baton Rouge rapper his big brother who supports his every move.

This is Forgery “Not even close to my signature smh ??I was shot n a wheelchair when this was signed n given my artist to Empire ? Never knew nothing about this contract n everybody at the table knew this.They thought I was too gangsta too lawyer up pic.twitter.com/gSvospdjPA