Benzino and 50 Cent now feuding over comments made by the G-Unit leader alleging the former Love and Hip Hop cast is dating a transgender.

On Tuesday, a new video went viral with a trans person claiming to be in a relationship with Benzino and sharing several videos of herself with him talking in the background.

The former Source Publisher has been under pressure since his comments over the weekend, where he talked about his daughter Coi Leray being bisexual.

However, a day later, videos made by the trans woman Shauna Brooks hit the internet, with many reacting with a shock that Benzino was involved with someone from the LGBTQ community.

It didn’t take long too for 50 Cent, who is known for his anti-gay stance, to troll Benzino and even Young Buck, who a day before claimed that he was forced into bankruptcy by 50 Cent.

“Young Buck, Benzino just embrace who you are but don’t pat nobody butt when they score a basket fool,” he wrote. “LOL Hahaha, Nah. FOR REAL! PUNK!” 50 Cent wrote on Instagram.

The caption was shared with a dated video of Benzino talking about his sexual preferences.

Meanwhile, 50 Cent shared one of the now-viral videos of Shauna Brooks. 50 Cent tagged Benzino as he said, “LOL OH MY GOD, THIS GUY IS CRAZY @iambenzino.”

50 Cent’s latest jab at Young Buck comes after he spoke about how he was treated by the rapper. “Once he stopped me from being able to make money, I filed another bankruptcy,” Young Buck reveal.

50 Cent has been at Young Buck over his sexual preference for years as he trolled the rapper for being in a relationship with a trans woman. 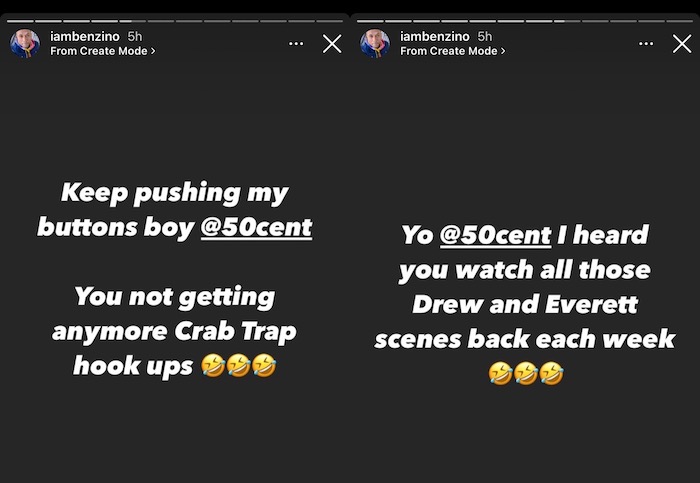 Benzino has since responded to 50 Cent in a message posted on his Instagram Story. “Keep pushing my buttons boy @50cent you not getting anymore Crab Trap hooks up,” he wrote while adding some laughing emojis. “Yo [50 Cent] I heard you watch all those Drew and Everett scenes back each week.”

50 Cent has not responded to Benzino’s statement but knowing the G-Unit chief, it’s only a matter of time.