Things have not been right between dancehall artiste Laa Lee, 24, and dancer Monsta Boss, 19, over money earned from one of Laa Lee’s latest hits, “Bird.” Both men have since voiced their opinions on the matter via social media.

Laa Lee Ranks has no doubt found immaculate form with dancing songs such as “Tip Inna It,” “Dirt Bounce,” and ” Bird,” earning the entertainer a number of streams on various platforms and round the clock spins throughout radioland. The deejay has never disclosed his earnings to the public, but at least one person believes he’s making millions and should pay up. Kingston-based dancer Monsta Boss, who proclaims the creation of the popular ‘Leggo The Bird’ dance move, has recently hit out against Laa Lee for what he has categorized as unfair business practices. According to Monsta, Ranks has capitalized off his work and has not compensated him for it.

Monsta took to Instagram to share various excerpts of conversations with Laa Lee in which he requested money to use his dance for Laa Lee’s track “Bird.”

“Laalee U think a volunteer Man come Inna This Fah,” Monsta questioned while making it known that his dancing efforts are geared towards the betterment of his mother, his kids, and himself. The caption of the social media post also conveys that Monsta has copyrighted the dance move.

He doubled down on his stance in his IG Story, “Some p**sy did a Try Used Man But That Cyaah happen. Mi Talk an it Done.” 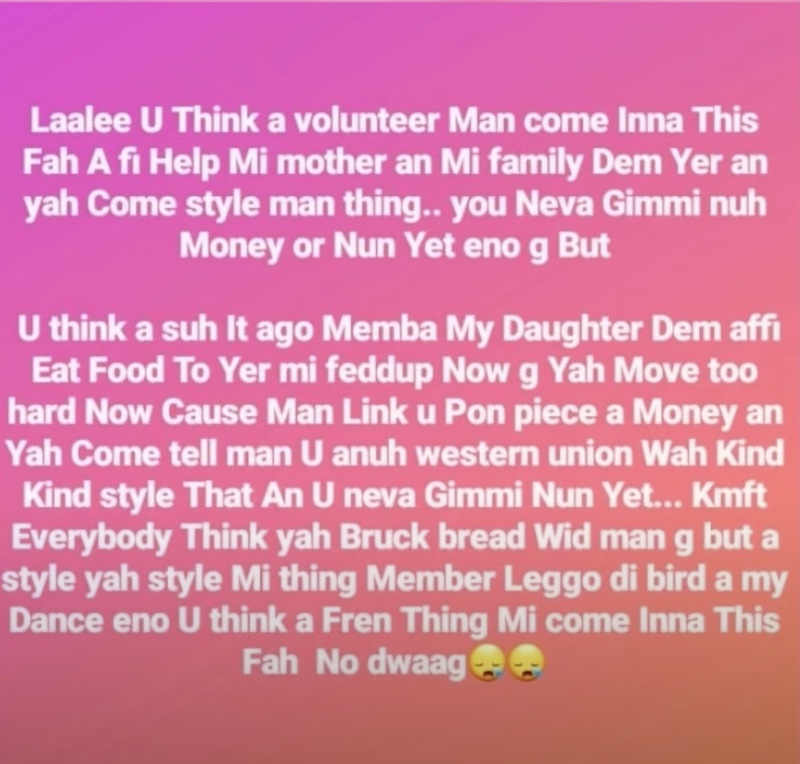 Per text conversations shared by Monsta, Laa Lee shared the breakdown of how the song came together and those who are compensated.

“Fam u expected someone to make the beat, Another person write the song, Another sing song and they capitalize booking on that,” the “Watz On Sale” singer questioned before, hinting that Monsta did not have full knowledge of the business side of the production.

“Think me a make millions?” He asked while urging the dancer to make use of the popularity of the song in his own way, much like other dancers before he had done.

“Me nuh owe u, make use of the opportunity, song going good, I’m doing the same,” he shared while dropping hints of how the dancer could work to put his talent on display.

“My Likkle can’t share fi everyone, milk u own cow,” Laa Lee expressed.

The deejay shared similar sentiments in his Instagram LIVE, where he contrasted the business practices of Monsta Boss against that fellow dancer and friend Pata Skeng. He explains that the latter readily jumps at opportunities to share his talent with the world while seeking out ways to market and monetize his craft. According to Laa Lee, an opportunity for Monsta to appear on Winford William’s On Stage came along. However, the dancer stated he was off the island, supposedly not true. On that note, the entertainer gave an insight into how companies select brand ambassadors, hinting at his own deal with Digicel.

“It’s how you market yourself, breda uno have the hottest dance them, you think Digicel and them company de no wa see uno. A how you market yourself. Uno wa come pon social media wid big spliff, nuff time company wa look in pon uno but uno kill unoself, uno degrade uno owna self. Me see it breda! When Digicel a sign me a no me alone dem did wa sign but when them look pon the other person page, him have big spliff inna hand at that de age de..Uno no see dem things here breda,” Laa Lee commented.

Some fans have been calling for peace between Monsta and Laa Lee while sharing just how each person has already benefitted the other.