Future has a lot more baby mama drama on his hands as his feud with Brittni Mealy intensified.

The Atlanta rapper has been making headlines for the past week after his baby mama Brittni Mealy went public with accusations that he told their 8-year-old son that she is an “h*e.” Of course, Future denied he ever did or said what she accused him of, and she insisted that she is telling the truth.

Just when we think that their public melee was done and over with, an audio allegedly leaked by Mealy surfaced online over the weekend that has since gone viral. The audio is reportedly Future telling Mealy that he loves her while stating that he never loved one of his other baby mamas, Joie Chavis.

“I don’t look at Joie like I look at you,” the rapper said in the audio. “Me and Joie always been friends, super cool. Like, don’t even know that me and her was just always been super cool to the point where we still could be cool right now.”

Future added that Joie Chavis knows that he never loved her.

The audio ended with him telling Brittni Mealy that he loves her, saying, “I love you.”

Brittni Mealy has since apologized to Joie Chavis, saying that it was never her intention of bringing her into the drama between her and Future. “Not my intentions to bring no one else into it,” she wrote in a post on her IG Story. “I don’t have a issue with her the thing is he wanna be even more petty and get my business page deactivated.”

“Just wanna say I apologize to Joie for bringing her into something that had nothing to do with her,” Mealy added in another post. “There is no beef. As a woman it’s never my intention to try and tear down another woman, y’all know I work so hard.” 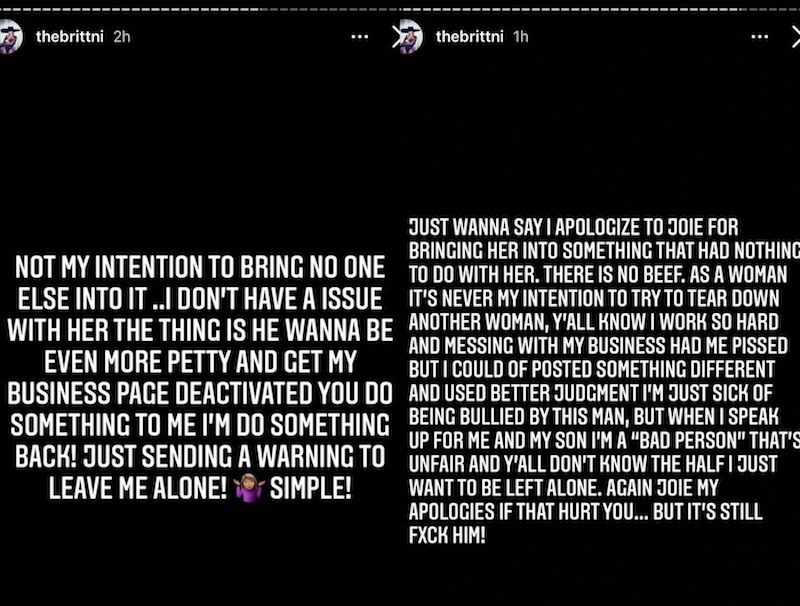 Future and Chavis have a 3-year-old son together named Hendrix. She also has a daughter from a previous relationship with Bow Wow.