Instagram has been on a fact-checking mission as the popular social media network screens posts which share misinformation about the Covid-19 pandemic.

On Tuesday, Buju Banton became the latest in a number of persons who have been advocating against measures being put in place to curb the virus and promote vaccination worldwide.

Buju Banton, whose real is Mark Myrie, is among a few artists in the reggae/dancehall sphere chanting fire on the vaccines and pushing the idea that the virus is a hoax and sinister plan by governments to use curfews and such measures to oppress and control the population.

The pandemic has been raging as many more variants are discovered as new developments in regards to the vaccine pop up.

The post in question that Buju shared was a graphic that said there was a sinister plan to release various variants of the Covid-19 virus over the next few years.

“There are PLANNED COVID-19 VARIANTS- just look at the dates when they will be “released” to the media. DON’T BE STUPID YOU ARE BEING PLAYED AND MANIPULATED,” the post read with dates from June 2021-February 2023 listed and the John Hopkins University, World Economic Forum and World Health Organization allegedly implicated in the so-called plot.

The fact-checker for Instagram noted that the post was flagged because “flawed variant information fuels baseless Covid-19 theory” and that the “schedule of planned Covid-19 variants,” is fake.

“Uh Oh,” Posted of the post with a news headline that said

The note by Instagram has not stopped the artiste who continues to share his conspiracy theories with his latest post of a news headline seeing to justify his latest rantings.

“Uh oh,” the artist posted to accompany a screenshot of a news headline that said, “New COVID variants Epsilon, Lambda may be resistant to vaccines, early lab studies show.”

The Grammy Award-winning is followed by over 1.3 million followers, and quite a few, including dancehall artist Spragga Benz, share the same opinion as to the artist. 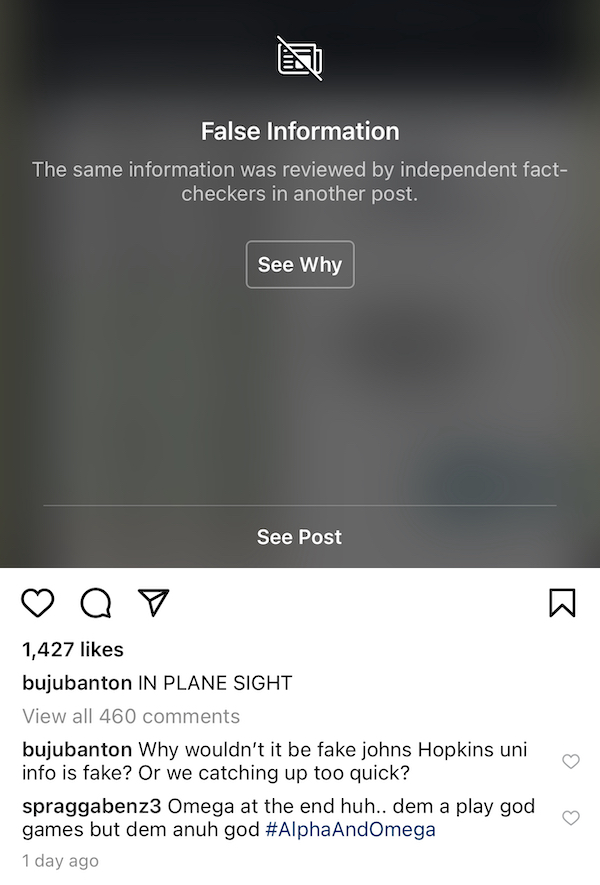 On the other hand, the majority of his followers don’t seem to be on the same train of thought as Buju Banton, as his musings were rebuked by some followers.

“Don’t spread false news Rasta. Many people look up to you,” one of his fans commented.

Some also poked fun at the artist. “ahm they prename hurricanes too how is this any different. Those are common army names I could ake that list up myself and make it even look better than that,” another commented with a trio of laughing emojis.

The artist has been on his social media as he claimed that the island was under a “deadly media blackout” as it is not highlighting “depressive issues” facing the island.

Buju Banton’s rantings began at the beginning of the pandemic in 2020 and even drew a rebuke from his own daughter Abihail Myrie, who urged persons not to listen to the deejay and comply with the government regulations.

Buju Banton was deported to Jamaica in late 2018 after his arrest in 2009 for cocaine-related charges in the United States and his subsequent 10-year mandatory sentence.

The artist has seen his followers divided as many die-hard fans welcomed him home with open arms while others ridiculed the hero-like status that was ascribed to him.

The latter was particularly stunned when they viewed video evidence released by United States prosecutors showing the devout Rastafarian’s tasting cocaine from a kilogram bag during negotiations on the drug deal. The deejay had maintained in his defense that he was entrapped by undercover feds.

He was later convicted for conspiracy to possess with intent to distribute five or more kilograms of cocaine in Florida.

In the meantime, the artiste has been lauded by the likes of DJ Khaled and others. In the meantime, he has continued his charitable works through the Buju Banton Foundation, which included donations to a Boy’s Home to inculcate music learning as part of their upbringing at home.