Kanye West gets his own day in Atlanta.

On the heels of his 10th studio album, Donda, preview at the Mercedes Benz Stadium in Atlanta on Thursday night, the City of Atlanta is honoring the rapper in a one-of-a-kind way by declaring that July 22 is now Kanye West Day.

Thousands of fans attended the event, and even more Livestream it on Apple Music as Donda the highly anticipated album becomes ready for fans.

Kanye West has been noted as one of the G.O.A.T.S of this generation’s music and art, and following the mega event, the City of Atlanta showed its appreciation to the rap mogul with a plaque denoting the declaration of Kanye West Day.

A video of the ceremony shows Kanye West in red merino and trousers as he dons a nude face mask backstage after his performance and receiving the plaque as his estranged wife Kim Kardashian, his children, and members of the Kardashian clan look on.

Kanye West was born and raised in Atlanta until he was three years old, when his parents divorced. His parents Ray West is a resident of the City of Atlanta and was a photojournalist for the Atlanta Journal-Constitution, while his mother, Donda West, was a professor at Clark Atlanta University. 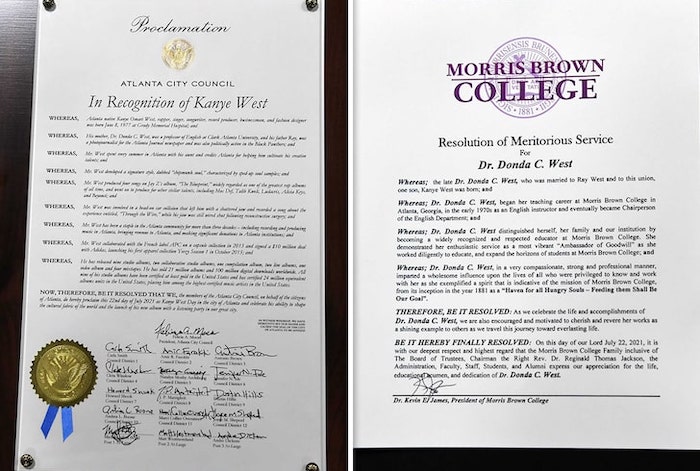 The rapper now lives between California with Kim and his children and Wyoming, where he owns a ranch home.

The new album is named after his late mother, Donda West, who passed away in 2007. However, there was an honor for his mother by Clark Atlanta University, where Donda spent a significant amount of time as a professor.

Right after the City of Atlanta’s proclamation, Kevin James, the President of ATL’s Historically Black College or University, Morris Brown College, handed over to Kanye a tribute to his mother, which he received on her behalf.

West’s mother, who taught at the school for nearly 20 years and served as Chair of the English Department, was conferred with the honorary resolution called the Dr. Donda West Meritorious Service to Morris Brown College.

According to James, Kanye’s mother began her teaching career at Morris Brown, one of the few historically black colleges founded in 1881 and remains the only college in the State of Georgia founded by Black people.

Meanwhile, reports are that the rapper became emotional while receiving the award but was happy to be surrounded by his family and children.

The rapper is due to drop his album Donda this evening at midnight as anxious fans excitedly waited for the release following the preview of the features.

Many online were posting and calling out the rapper to release the album right away.

“Kanye where it at man im sitting here waiting,” one fan posted on Twitter with an accompanying meme of a caulking cartoon character.

Others, however, shared hilarious memes as they said the artist had raised their hopes up but was delaying the album.

He is expected to perform over the weekend at Rolling Loud Miami to promote the album.