Summer Walker is setting the record straight for those folks telling tales that she is battling postpartum depression and is neglecting her child.

The “Body” singer took to Instagram Live to clear the air for persons who have been sending her DMs and posting about her child. Summer Walker refuted all claims, saying her situation is the absolute opposite.

“I’m not even finna catch a million and some DM’s about my child again like that ain’t even true,” she said. “People who are not famous her sh*t about their child and they be willing to whoop their a**, whoop they own family’s a** about it so just imagine a million and some people in your DMs talking bout your f***ing kid.”

The 25-year-old artiste explained that the only time she is not with her child is when she is busy working. Walker, who is a new mother to a three-month-old infant, has been cooking up new music with SZA, Omarion, Pharrell, and Sean Garrett over the past few weeks. The “Girls Need Love” singer didn’t provide details on the collaboration but posted a picture of her and SZA leaning against the wall in a studio. While new music may be keeping her busy, Walker explained that this is the only thing keeping her from her child, and even then, it pains her to leave.

Walker also clarified that the only time she was depressed was when she was with her ex. While she did not call his name, fans are speculating that the singer was referring to her producer, former lover, and father of her child, London On Da Track.

Walker and London have engaged in a few public brawls, calling it quits multiple times publicly and then reigniting the flames. A few weeks ago, the couple called off their relationship and had made no public moves to get back together.

After her IG Live, Summer Walker took to her Instagram Story moments to call out London on Da Track for only seeing their child on weekends. 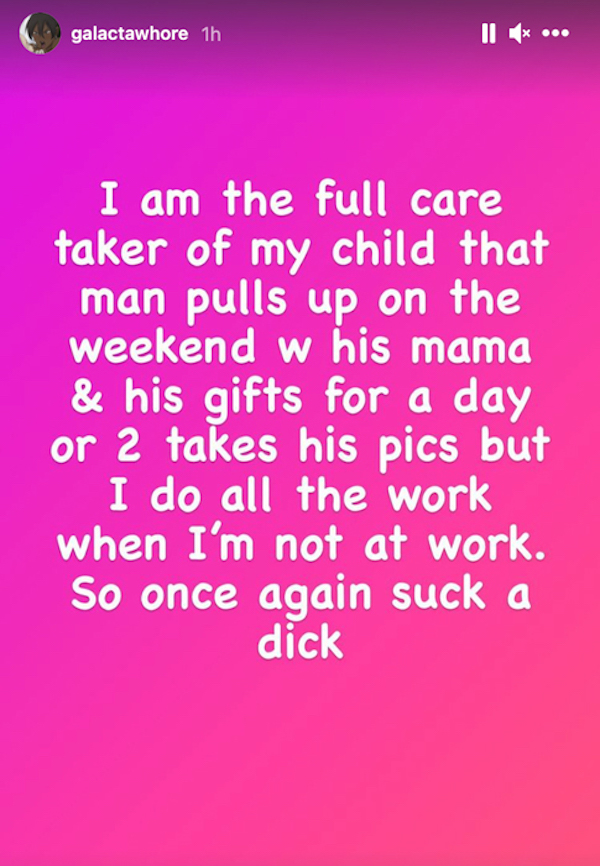 “I am the full care taker of my child that man pulls up on the weekend w his mama & his gifts for a day or 2 takes his pics but I do all the work when I’m not at work. So once again suck a d***.”

Her claim follows a recent post by her baby London On Da Track made on Instagram showing him feeding the infant outside an Apple store, captioned, “Big Daddy duties 24/24.” The producer also shared a video of his daughter on his lap, captioned, “Love love LOVE.”

London on Da Track has not yet responded to Summer’s claim, but fans are speculating that more drama is brewing.