The Migos says they should be on the Mount Rushmore list for Atlanta for all time. The rappers have been on the move as they promote their Culture III album and stopped by on The Breakfast Show where they discussed music and their lives.

“All time, shout out to the city, but it should be all time,” Offset says.

The rappers who were recently in Jamaica to shoot a video with DJ Khaled also shared their experience being on the island, which started with DJ Khaled sending a private jet for them to shoot the H.E.R video, having a private chef at the villa he was staying at and also covering all the expenses for their trip.

While in Jamaica, the Migos also met up with dancehall star Popcaan. “Popcaan’s hard,” Offset and Takeoff said. “He pulled up like a hunnid d. Jamaica was fun,” they added.

The rappers also spoke about how they feel about Pop Smoke’s death. According to Offset, he’ll pay any price to protect his family.

“Gotta move militant, man. Move like you got something to lose. You got kids to go home to so it’s important and I don’t believe in the tough man, Ima pay what I gotta pay to protect my family, everything, I’m having security at my house 24 hours,” Offset said. “Gotta protect yourself.”

Quavo also spoke about his friendship with Pop Smoke, who appears on their new album.

“Mentoring and making sure that he going through the right motions, asking about females and that type of sh*t.” 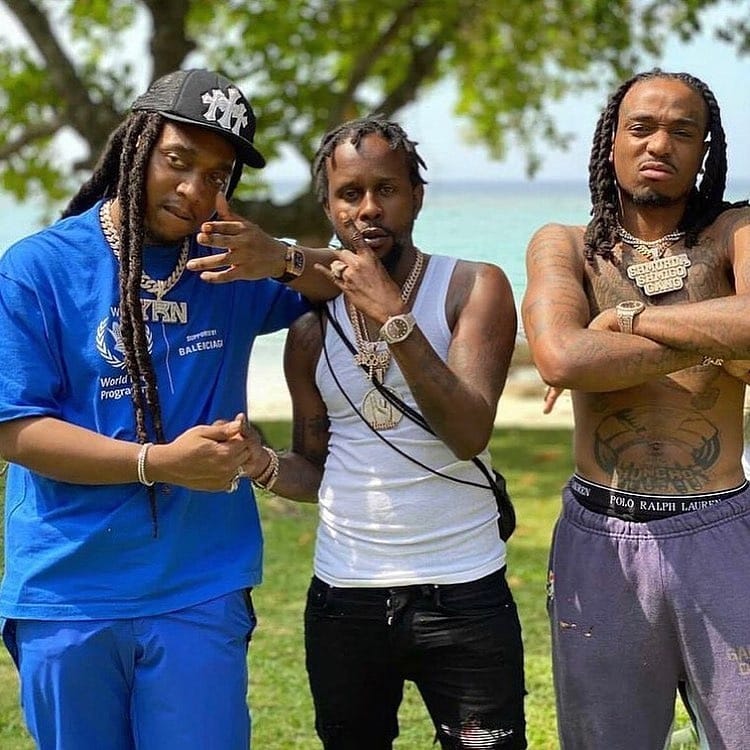 Meanwhile, Takeoff also reacted to being asked what he does when it comes to dating, “I don’t’, it’s so hard,” he says. “that’s what ask on my new album ‘what you see?’ I wana know what they see.”

Takeoff, who has become very vocal in his interviews, didn’t reply to questions as to how he picks up women- “I ain’t got no tea, you trying to get some tea,” he jokingly says to the co-host, Angela. “I feel like everything happens for a reason. I believe God got that special one for me. I be asking him if I do run into somebody ‘is this the one?'”

Meanwhile, Offset says that fatherhood has changed him. “You know it makes you see the bigger picture. It makes you see the real light. Sometimes you’ll be living on your own young with no guidance so now I gotta guide them. My kids really be paying attention to me, like if I catch them, if I’m about to post a video, my kids are staring at me so I notice that, I influence them so big and if I’m on some bull, they gon be on some it no matter what position, who what. Gotta be responsible,” he says. “I done made some big mistakes in life, so I try to stay on mine.”

Offset, who doesn’t have a solid relationship with his father, says he hasn’t seen his father much, but he doesn’t want to drag him through the mud.

On the other hand, Takeoff says he has been relaxing in the pandemic, which includes watching shows and buying watches. He also shared that he also saw his real estate investments go up in value.

The rappers also responded to critics who say they mumble rap. ”

“they could say we mumble rap but we could pick any bar or verse you think we mumble rap and we can tell you what we said,” Takeoff says. He added though that appreciation for music also has its challenge as the younger generation do not know music from the veterans.

“Some of our generation don’t know about the O.G music, the people born in the 2000s,” Takeoff says.

Offset, however, says that as a group, they have their own flow and cadence. “They don’t understand the flow…it was the cadence and the speed, if you go to 2013 when the artists had the bounce, now it’s slower that’s why we say we motivated this flow…they ain’t know what it was…” Offset says.