Buju Banton is not happy with a recent notice by the Jamaica Constabulary Force that says it does not need to warn persons who are found in breach of an offense under the Disaster Risk Management Act.

On his Instagram account, Buju Banton said, “all members of parliament who voted for this have declared themselves to be enemies of Jamaican people. DO NOT TRAD ON US ANYMOOR [sic],” Buju said.

Buju Banton has been a staunch critic of the government and its vaccination drive and measures geared at flattening the curve as infections spiked in the island. He is among a string of entertainers that includes Sizzla Kalonji, Spragga Benz, and others who have called out the government for the oppressive measures which have seen the entertainment industry grind to a half more than 12 months now. The government has failed to provide stimulus to assist mini and micro-businesses that are affected.

The notice in question read, “the public is being advised that as a result of the recent amendments to the Disaster Risk Management Act (DRMA), the police are no longer required to give warning notices before affecting an arrest for breaches under the DRMA. These persons can be arrested and charged immediately,” the public advisory read. 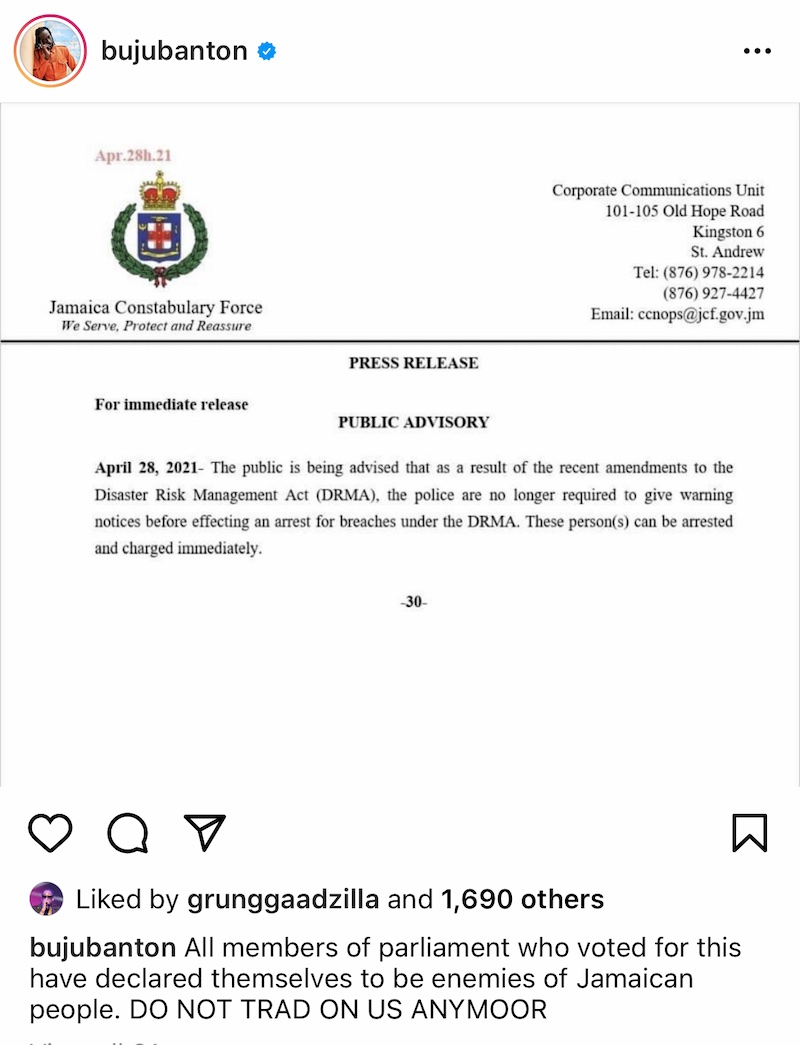 It seems that the police force is backtracking after Jamaicans released an onslaught of criticisms against the Jamaica Constabulary Force (JCF) after it said that charges against Usain Bolt for a secret birthday bash in August 2020 will not be laid. The JCF, via its Communications spokesperson Stephanie Lindsay last week, noted that the reasoning behind that decision was that Bolt was not given the opportunity to be warned because police were notified of the offense after the fact.

Furthermore, she said that usually, when offenses are committed, the persons are warned, and if they persist, then they are charged. She cited Beenie Man’s case as one such instance where the party promoters and Beenie Man were warned, but the party was still held in violation of the direct orders.

Jamaicans found the argument untenable as many online took to social media to call out the JCF for hypocrisy and favoritism towards Bolt because others are not dealt with in the same manner. Among those who have been charged is entertainer Beenie Man for a party held in St. Elizabeth, as well as ordinary members of the public.

Recent videos online have shown police brutalizing a man for failing to wear a mask. The man in a video was seen bleeding from his mouth as a woman alleged that his teeth were knocked out by police.

Buju Banton previously calls Prime Minister Andrew Holness’ measures to contain the pandemic, “oppression and tyranny.” While he received some support for making the statement, some Jamaicans pushed back against it.