Nicki Minaj stirs up some beef rumors after unfollowing a bunch of artistes on Instagram.

Some spring cleaning on Insta has led to rumors that Nicki Minaj is beefing with several artists. The hip hop superstar is currently following 544 accounts on the ‘gram, but until recently, she was following around 600 others. Nicki decided to do a bit of a clean-up on her page, hitting the “unfollow” button on the likes of Ariana Grande, Doja Cat, Megan Thee Stallion, and Katy Perry, as well as clearing out all but one of her Insta Story highlights.

Naturally, fans were suspicious, with many thinking it meant some undisclosed beef was underway… but before the Barbz could sharpen their claws, the “Megatron” rapper wrote on her Story, “Bare with me with this following list you guys. Sorting it out.” 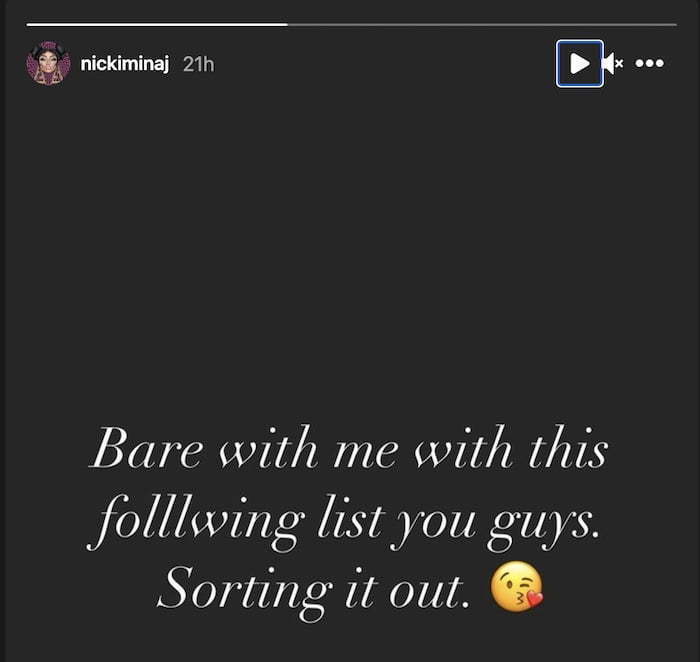 It’s not known what exactly prompted the clean-up — though some believe it may be because new music is on the horizon — but it seems as though things are all good between the new mom and Ariana as Nicki recently credited the “Thank U, Next” singer for sending some “gorgeous gifts” after her son was born at the end of September.

The 3-month-old finally made his debut on the rapper’s social media, with the infant already a fashionista sporting Burberry, Fendi, and Versace babygrows, leading to 50 Cent nicknaming him Richie Rich. Nicki Minaj has been very private about her son, refusing to reveal his name and instead referring to him as “Papa Bear.” She did disclose, however, that his name is NOT “Ninja” after she dropped that idea at the last minute.

Nicki Minaj also unfollowed her mother on Instagram yet there’s no noise about that. No noise about her unfollowing Ariana either. At this point y’all are grasping onto any and everything to make her look bad and it’s only making y’all look bad not her. ?

Nicki Minaj has unfollowed over 600 people today and remove her highlights on Instagram. ? pic.twitter.com/pR4BIDq7YM