Stylo G and his baby mother UK based dancehall artiste Lisa Mercedez seem to be at loggerheads, and the Worl Boss Vybz Kartel is right in the middle of it. It’s not the first time that the Worl Boss has entered the chat or brought into the chat, as this case is. Earlier this year, Lisa Mercedez announced that Vybz Kartel is her man, although she had never met the Fever artiste who is presently incarcerated for murder in Jamaica while she resides in the UK.

Leaked images of a screenshot purportedly from Lisa Mercedez to Stylo G show the two arguing over money for child support for his daughter. The pair’s daughter, Jadie is six years old.

In the chats Lisa is seen telling Stylo he still sound hurt to which Stylo says “hurt by what”? “Remember u need to fix yu breast dem. U fake”.

Stylo also asked Lisa to return his money that she owes him -$4,000 and says money for child support goes on “when I have it, don’t bad mi up.” 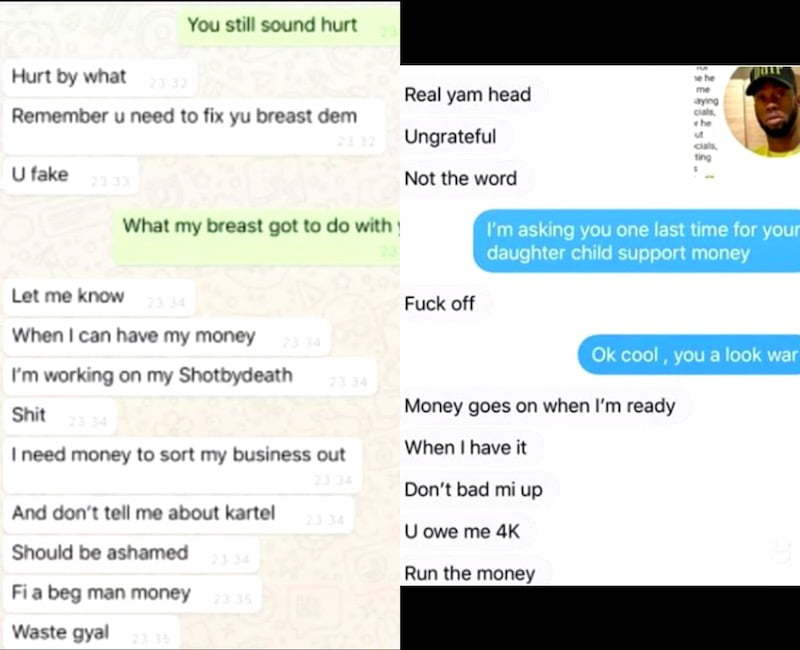 Meanwhile a leaked voice note purportedly of Lisa Mercedez to an unknown person has her complaining about Stylo G saying she has vaginal odour.

“Bere sumn say mi pum*** stink the man ah tell me, yow you used s*ck my p***y every night yow so mi nuh get it. You used to lick out my Batty and p***y everynight. Yow the man ah bully me.”

In June, Lisa Mercedez made it clear she was done with Stylo G with her various social media appearances claiming that she is not a bitter baby mother and she was now in a relationship with Vybz Kartel and wanted to marry him. However, the pair has been at it for a while after allegations that Stylo G cheated on her two years ago and went on vacation with another woman.

This is not the first time that Stylo G is in baby mama drama. Last year the mother of his son took to social media to accuse the artiste of being a deadbeat and not going to look for his son. It seems though, that the two have a good relationship, as is evident from stories on the artiste’s Instagram that shows him and his son cooking oxtail and hanging out over the weekend.