Vybz Kartel has one message for black people as he weighs in on U.S. politics

Prolific Dancehall deejay Vybz Kartel has never been shy about offering his opinion about politics and the fact that he believes politicians are not for the betterment of poor people. He’s taken a while to weigh in on the recently concluded US General Elections, but his thoughts on the matter seemingly remain consistent with his strong political views.

He posted this message to Instagram, which sums up his feelings, “Even if a dog or a cat should become president, black people will still suffer, and everyone else will prosper. ‘Cause black people want a savior. Everybody else wants power #saveyourselfordie.”

Kartel has never been a fan of politics or politicians, and many times throughout his career, the incarcerated artist has blamed politics for trying to stop him from enlightening the masses. As recent as September, he took umbrage to artists cutting dubplates for Jamaica’s General Election. 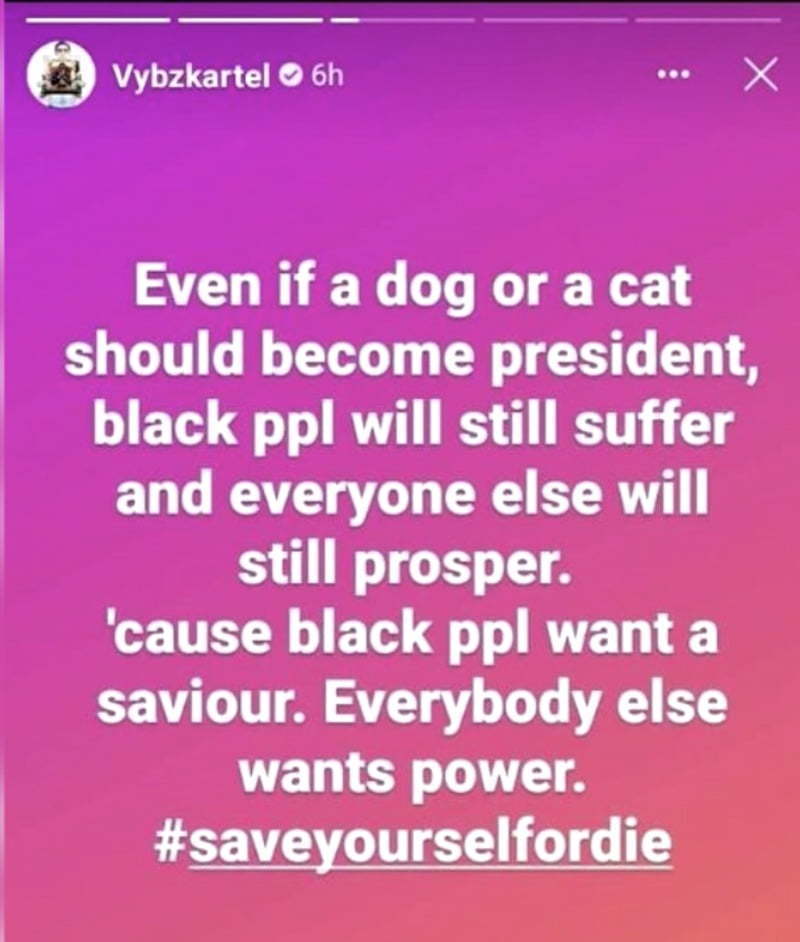 He took aim at artists like Shenseea, Stylo G, and Tee-Jay, who recorded plates for both of the major parties in Jamaica, the Jamaica Labour Party and the People’s National Party. While it’s been a tough year because of the pandemic for artists, Kartel insisted that they should have stayed out of the political arena even for a quick buck.

In August, he dropped his own dubplate on his Instagram account, which was a hard-hitting piece against candidates and fellow artists. On that plate, he demanded that both parties do better by the Jamaican people adding that their dogs had better lives than the poor people. He also called on poor people to stay away from voting unless their circumstances were guaranteed to be improved.

He’s been an advocate for change for many years now. In 2010, he told Vibe magazine, “Politics created these uncontrollable monsters called ‘Garrisons’ to exploit poor people. Tens of thousands of poor people have died in the name of politics, while the politicians themselves have lived to amass enormous wealth at the expense of the less fortunate. Both the JLP and the PNP are harvesting the seeds they sewed in the 60s/70s, and this is the cause of all of the ills in Jamaica, land we love.”

He also has tracks dating back to then that express his strong views that neither political party cares about the people. In fact, he has his own vision for a government that he discussed in his song “The World Boss” from his latest album Of Dons and Divas.

In that song, he describes what he would do if given the chance to be in government, and that includes a house and a Mercedes for every impoverished child and free education.

He shares his vision with these lyrics: “World Boss step ina parliament/Every ghetto yute a get a house and a Benz/Child molester dem a get a rope and a heng/Juvenile nuh sleep a road we a put up all a dem/Set up the elderly dem is di root not the stem/Black woman a mek money like di day nah no end/Education it affi free nah fi spen/Nuh crime nuh gwaan again mi link di shotta dem.”

Even though he probably knows that is not a realistic aim, it’s clear that what Kartel desires is that the people who suffer the most on the island be given a chance at a better life.