Jada Kingdom says she will be one of the greatest to ever take up the mic.

Sporting an unmistakable new look while in Los Angelos, Jada Kingdom yesterday, November 10, declared that she would someday rise to become one of the best female artists in the genre. “I’m going to be one of the biggest female recording artist & live performer from Jamaica,” she wrote. Her fans responded to her declaration with some positive affirmation.

It’s no wonder that the budding deejay would feel so confident, especially having come so far along from the first time that she began gaining popularity after appearing in Sean Kingston’s music video for “One Way.” She’s also a sought after model and appeared in Risqué Photo’s My Life Series IG Spotlight in May 2017. Her talent has also gotten her a lot of fans, and her Instagram following is now well over a million.

Jada has opened up about having to rise above negative comments about her image while growing up, and this has seemed to fuel her tenacity. Since 2019, when she also started dating Verse Simmonds, her music has resonated even more with fans. 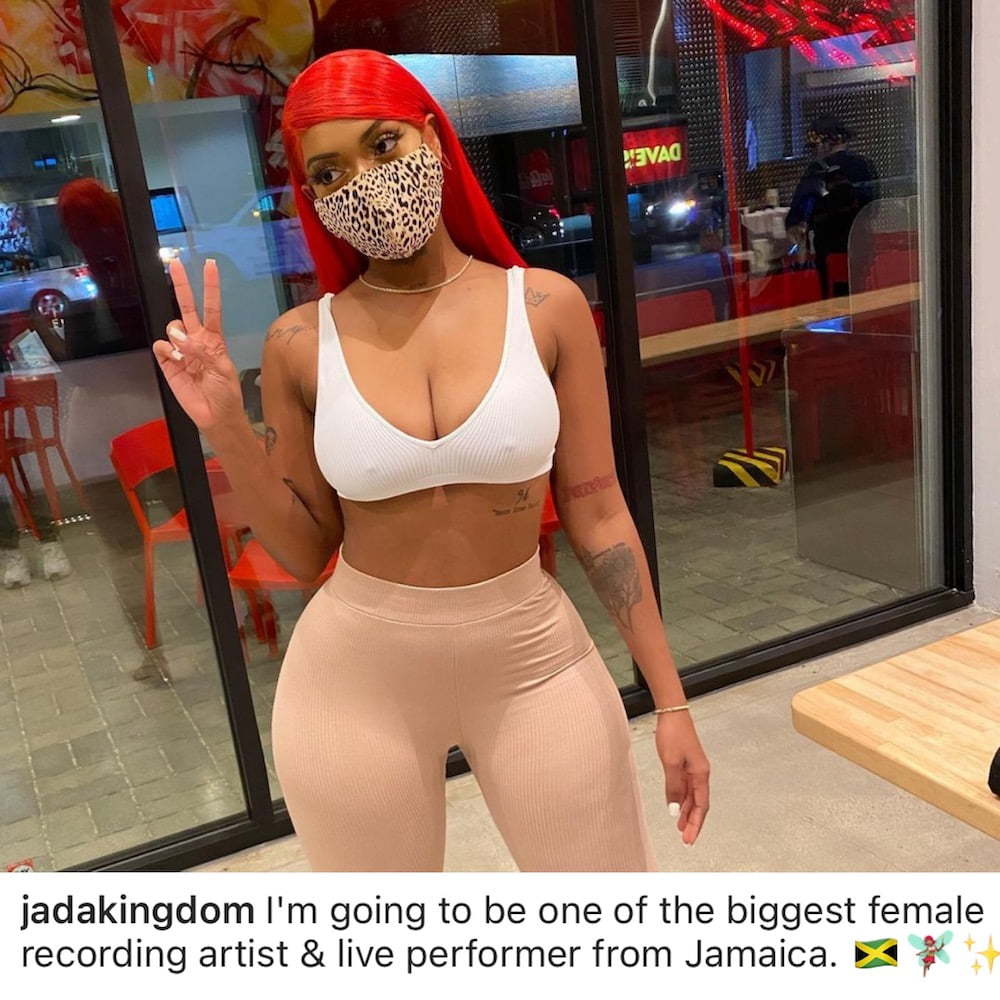 This year has certainly been great for her career as following her big hit song “WiN,” she raised eyebrows with her single “Budum,” which was her first to be released on Diplo’s Mad Decent label.

She spoke about that achievement and admitted that this year has been a great time for growth. She said, “It’s been such a crazy year with the pandemic,” through a statement. She added, “I just wanted to release a song that is fun and will make people happy and want to dance again.”

This track came after her “The Twinkle Playlist,” which was a 30-minute mixtape that Kingdom uploaded to Audiomack. She used that mixtape to showcase the range of her skills as she put her own spin on popular songs like Megan Thee Stallion’s “Savage.”

Probably one of her most notable achievements this year is featuring on Popcaan’s FIXTAPE when she collaborated on “Suh Me Luv It” with the Unruly Boss. She’s really stretched her arms this year and also featured on rising deejay Skillibeng’s “Tek It.” That video has a little over three million views since it was released on YouTube in August.

All this pales in comparison to her achievement with her song “WiN,” though. She broke out of her mold with that hit and dealt with issues that deviated from her usual lyrics and focus. In this song, she highlighted several issues affecting the people of the world, including poverty. Her inspirational message touched a special note with fans.

Since its debut three months ago on YouTube, it’s reached close to four million views. It was a track that showed she understands what people are going through and that she wants them to try and remain motivated to overcome these circumstances.

It’s reflected throughout the song like in this verse where she sings, “Minimum wage cyah cover mi bills Somebody tell mi How mi gonna live / Me might complain But mi nah give in Although it nah show Only me and / God know How mi day go More while mi affi make Mi affi make a bad.”

The video was shot in her community of Seven Miles, Bull Bay, St Andrew, and she uses it to good advantage to show the day-to-day struggle that people of communities like that have to face. There’s no doubt that Jada has been on the rise and will continue to prove she has what it takes to be a top artist in Dancehall. Her hard work is paying off as well as she also took some time recently to share some light Instagram Live detailing her experience in Los Angelos so far and how booked she’s been.

The focus in that video, though, was mainly on her long flowing red hair. She jokingly spoke about how busy she’s been in LA going from show to show and the fact that she slept in the airport recently. She admitted that she only came on Live because of her boredom now that she had some downtime.