Last month, the “Wishing on a Star” rapper made it clear that he has been wishing for the Houston hottie to give him a shot after she posted a clip featuring some sexy lingerie to the ‘gram. The video involved Meg unboxing the new pieces she had received in her capacity as an ambassador for Rihanna’s Savage X Fenty lingerie range, and it caused Slim Thug’s mind to start doing overtime. “Wear it for me,” he wrote in the post’s comment section. The 40-year-old also offered to be the “WAP” rapper’s “video ho” after she uploaded a video of her and her friends twerking in the pool. Slim knows that he has earned himself a reputation of being thirsty on IG, but defended himself by saying, “I’m the realest dude on Instagram and all y’all fake… If the b**** fine, I’m liking the picture. If I think she fine, I’m gon’ put heart eyes under.”

Not deterred by those on social media who declared that Slim Thug should leave Megan Thee Stallion alone, the fellow Houston artist has once again attempted to shoot his shot. “2 weeks of HotGirl boot camp,” Megan wrote alongside a photo of herself posing in the ocean while wearing a bright pink, scantily-fitted bikini. The post received almost 2.5 million likes, and amongst the comments was one from Slim, which read, “Come yo fine ass home”, along with those infamous heart-eye emojis. Although he wouldn’t be the first to fall into one of Hot Girl Meg’s thirst traps, those on Insta told Slim to calm down, mainly citing the 15 year age gap.

Perhaps Megan Thee Stallion isn’t really into Slim Thug for whatever reason. Since making her debut onto the scene, Meg has made her mark on the airwaves as well as on the fellas who consistently shoot their shots at her. 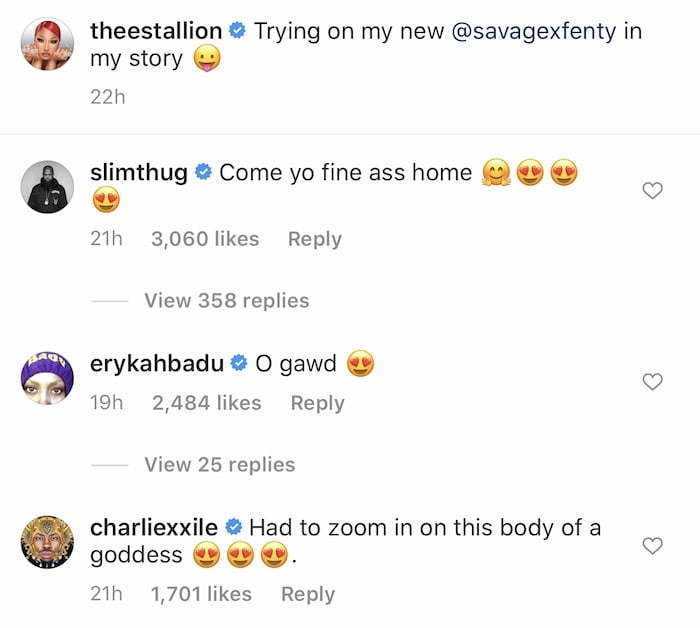