Is Keyshia Cole a heartbreaker?

Months after Niko Khalé split from R&B singer Keyshia Cole, the rapper says he is heartbroken. The couple reportedly split earlier this year but have been keeping the personal details private. While the events leading up to the separation are still under wraps, Niko may be giving us a hint with his recent comment on social media. When he took to Instagram to post a photo of himself on a yacht gearing up to celebrate his birthday this month, a fan couldn’t fight the urge to counsel.

The fan, championing for black love, encouraged Khalé, 24 to “fix it” with Keyshia Cole, 38, citing that she is tired of seeing these shortlived relationships. Something about the note must have struck a nerve for the hip-hop artist who wrote back, “My heart is broken. My mind is open. My times approachin.” So here’s to hopin’? 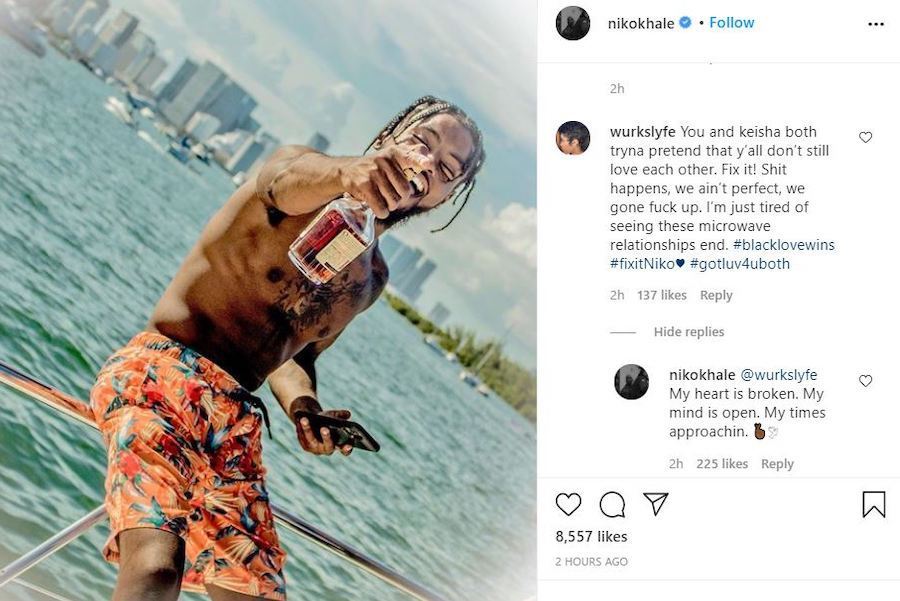 While his response was a bit enigmatic, it seems Niko is looking forward to what lies ahead in spite of the fact that he is dealing with heartbreak. Rumors of the split first surfaced in July when eagle-eyed fans noticed that the couple had unfollowed and removed photos of each other from Instagram.

When the couple first got together, some fans expressed concern about their 15 year age gap, and many probably assume it was the reason for the break-up this year. However, it remains unconfirmed whether that had any relevance in their decision to separate.

Niko Khalé and Keyshia Cole welcomed their son Tobias Khale in 2019. The 1-year-old is Niko’s first child and Keyshia’s second after her first son from her previous marriage to a former NBA athlete. The singer’s divorce was not final until early last month, which she excitedly announced on Instagram.

Do you think Keyshia Cole really broke Niko Khalé’s heart, or was he just giving us a taste of the lyrics from his album?