Popcaan exposed groupie Celina Powell’s DMs asking for a train from him and Drake.

Chief Keef’s baby mama Slim Danger was the guest on the Thots Next Door podcast hosted by hip hop groupies Celina Powell and her friend Aliza for the No Jumper Youtube platform. Among other celebrities mentioned, dancehall’s unruly champ Popcaan was also thrown into the mix as a possible name to be discussed.

The artiste, who regularly flexes with Drake, was immediately labeled as a Canadian rapper. While the interview is a few days old, Popcaan was handed the perfect opportunity to clapback at the ludicrous claims, and so he did. Celine Powell, who admitted to not knowing who Popcaan was, slid into the artiste’s DM to apologize for her misconception of the artiste’s nationality, along with offering herself as a prize.

A now-deleted post of the screenshot showing the conversation between Popcaan and Powell was shared on Popcaan’s Instagram earlier today. “Sorry I didn’t mean any disrespect,” came the opening line of the apology from Powell, which concluded with her saying, “Nice to know you’re JAMAICAN.” The apology was accepted by the “One Man She Want Singer,” but he also delivered a stern warning to Powell and possibly the other two ladies when he said, “don’t play with me or my island.” 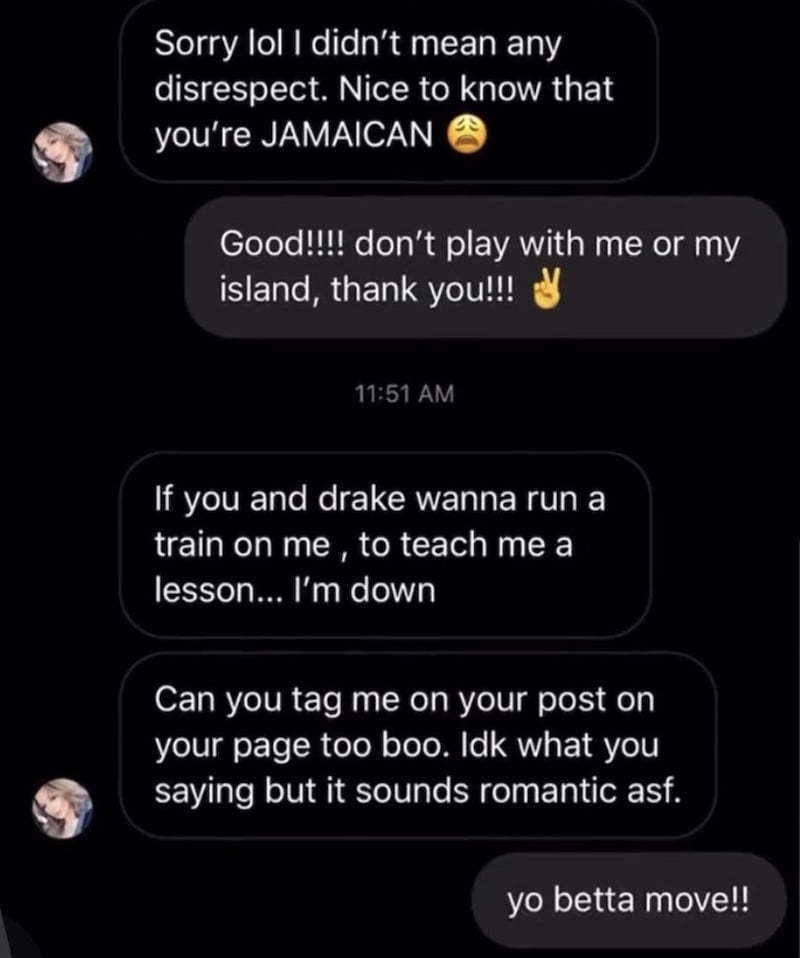 Clearly Powell thought she had the perfect way to make Popcaan and his Canadian friend happy when she offered up herself. She made him aware that “If you and Drake wanna run train on me, to teach me a lesson… I’m down.”

“Can you tag me on your post on your page too boo,” came the follow-up request from Powell before she commented on just how romantic the singer’s lingo is, even though she doesn’t understand exactly what he’s saying. It may actually be a good thing that she is not versed on Jamaican patois since Popcaan was clearly not in the mood for groupie snacks, nor was he down with promoting the content. He dramatically declined by saying, “yo betta move!!”

During the Thots Next Door episode, Keef’s baby mama Slim explained that Popcaan gave her the old switcharoo when she was trying to offer up herself to him; talk about consistency. The “Twist N Turn” deejay addressed Slim in an Instagram video in which he called her a “p-ss up mouth gal” while telling her to, “watch how you call man b—–claat name, real authentic yaad man this, you better move.”

Popcaan also came for the ladies in the caption of the post, where he asked fans to wage an attack on Slim Danger while representing for Jamaica. “YAAD REP( several Jamaica flag emojis, to make sure there is no mistake) a nuh B—–t DOM REP( smiley face) me unruly them unu done har fimme dey!!!.”

With way over 3000 comments under the video, it’s safe to say that Popcaan’s fans responded heavily to his request.

#popcaan is a Canadian rapper now ??