Skinnyfromthe9 is currently in the hospital following a shooting incident.

Although what exactly went down is still up in the air, the situation was confirmed by Skinny’s management via his Instagram account. “Skinny is in the hospital we don’t know what’s going on he did get shot. Pray for him,” the message read, before ending off with, “This is not a joke.” Details surrounding the incident or even how serious his condition is were not made available. The “Love Blast” rapper did, however, share a video to IG in which he is seen lying on the ground when he said, “I just got shot.”

The rapper’s management confirmed later on that a shootout had occurred, and Skinnyfromthe9 was undergoing surgery, but that all are expected to be fine. 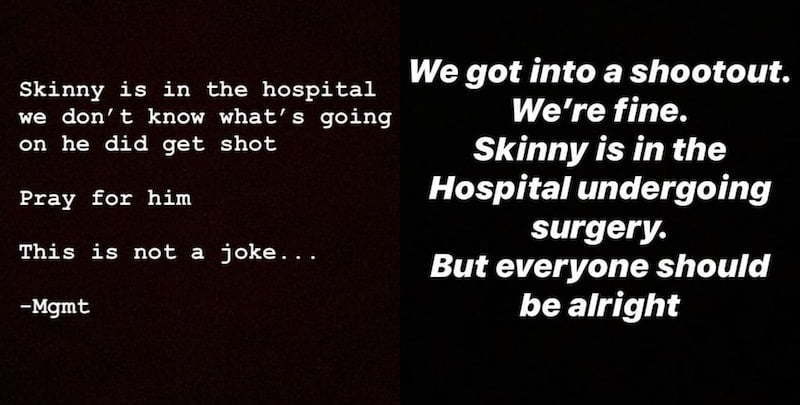 This is at least the second incident to affect the rapper in the last year. In January, a video emerged depicting Skinny being beaten to the ground with some guys who wanted his chain. Following the clip going viral, the 24-year-old jumped on the ‘gram to discuss getting jumped.

“I was set up by someone I thought I could trust, a close friend,” he shared in his 4-minute elaboration on IG Live. “He told me to come to his birthday party and I did… I just came by myself and one of my friends. When I got there, there was like 20 dudes waiting for me outside… 20 guys, two times bigger than me, just all attacked me.”

The circumstances around the shooting remain unknown for now, but we hope that Skinnyfromthe9 makes a full recovery.