Jada Kingdom’s lawyers have released a cease and desist statement informing all parties who made allegations against her that they will be taken to court.

The “Banana” singer’s name has been in the headlines steadily for the past week. A female, known only by the Instagram handle, “Malieboo_toptop,” made numerous allegations against Jada Kingdom, claiming that the pair were in an intimate relationship. She also stated that Jada was associated with gang members, and she announced that Jada had been raped. Malieboo further went on to allege that the dancehall diva’s relationship with American rapper, Maurice “Verse,” Simmonds was just for publicity. she vehemently denied the allegations requesting that the posts be removed.

She went on to share her side of the situation, stating that the woman had nude videos and photos of her from about 5 years ago, which she used to blackmail her making monetary and material requests. Jada Kingdom says they had squashed the issue after the woman apologized to her, and she thought that was the end of it.

Malieboo then went live on Instagram, alleging that the dilemma sparked from Jada wanting to be in a relationship with her and Simmonds at the same time, which she would have agreed to if she was paid a sum of $800,000. Jada later uploaded a video confessing that she was in fact, raped. Speaking directly to her accuser Malieboo, she stated, “We were never in a relationship, never in an entanglement, me never touch you. Just stop.” Jada declared that she was through speaking on the matter and would be requesting a restraining order and reporting the accusations to police and that her lawyers would now be taking over the matter.

Now that warning has come to fruition as Jada Kingdom and her legal team released a statement informing media sites and bloggers as well as her accuser to cease & desist stating that she will be filing lawsuits against all those who circulated the information. She began, “Earlier this week some utterly baseless, scurrilous and disgusting tales were made by someone I barely know with the aim of smearing my name and reputation as well as a futile, but very deliberate, attempt at harming my career.” 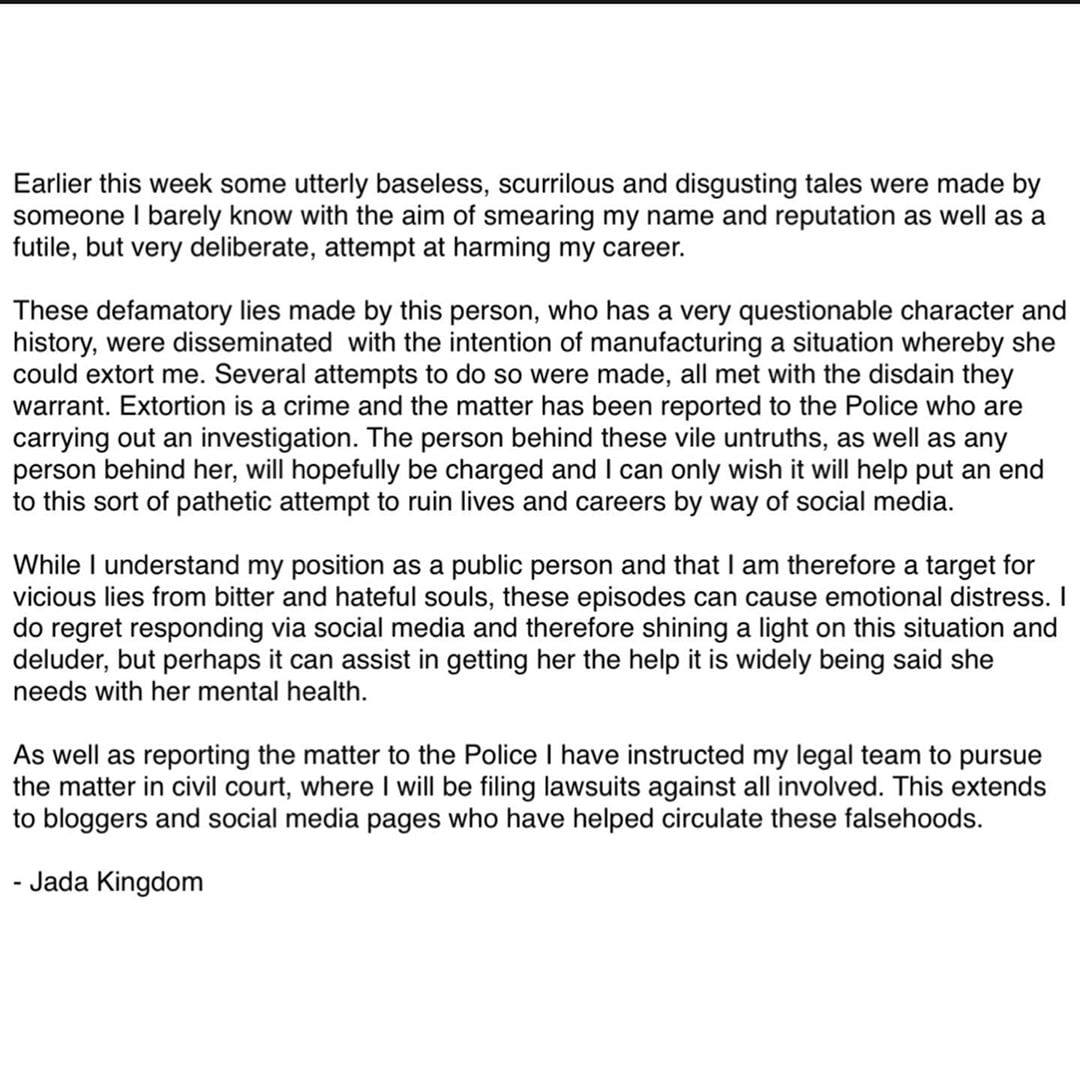 She continued, “These defamatory Iies made by this person, who has a very questionable character and history, were disseminated with the intention of manufacturing a situation whereby she could extort me. Several attempts to do so were made, all met with the disdain they warrant. Extortion is a crime and the matter has been reported to the Police who are carrying out an investigation. The person behind these vile untruths, as well as any person behind her, will hopefully be charged and I can only wish it will help put an end to this sort of pathetic attempt to ruin lives and careers by way of social media. While I understand my position as a public person and that I am therefore a target for vicious lies from bitter and hateful souls, these episodes can cause emotional distress. I do regret responding via social media and therefore shining a light on this situation and deluder, but perhaps it can assist in getting her the help his widely being said she needs with her mental health. As well as reporting the matter to the Police I have instructed my legal team to pursue the matter in civil court, where I will be filing lawsuits against all involved. This extends to bloggers and social media pages who have helped circulate these falsehoods.”

Jada Kingdom also followed that up by having her lawyer send a cease & desist order to various social media bloggers, including DJ Lava. It read, “It is my instruction that you have posted false information about Jada Murphy on the internet. None of this information is true and the contents amounts to defamation of character and could cause losses in revenue for Jada Murphy. It is also a criminal offence to post such false information on the internet and you could be convicted to spend time in prison for it. This is a formal demand for you to cease and desist with Immediate effect from posting any false information about Jada Murphy. We also wish for you to remove all defamatory information from the internet that you have posted. If you fail to do so with immediate effect we will have no other option but to get the police involved and have the matter dealt with in the relevant Court of law.”

See below for DJ Lava’s response where he declared freedom of speech as well as criticized Jada for her past beef with singer Shenseea where she publicly took shots at Shenyeng.

Jada Kingdom later went Live on Instagram admitting to being a bisexual pointing out, however, that she only does it for fun, not for a serious relationship. Fans have resolved to believe that the accusations against Jada might be factual, citing that she sounds guilty.