It is the firm believer of the writer that the month of July should now be called the month of entanglements. While American actress Jada Pinkett Smith may have educated the public on the definition of the word, a social media blow-up between Jamaica’s own Heavy” queen ‘Jada’ Kingdom, and her alleged ex-girlfriend who goes by the Instagram name Malieboo_toptop, should definitely be listed as a definition in the dictionary.

The Instagram Stories and Live content shared made for an interesting evening as both women aired out each other’s laundry, which ranges from supposed sexual exploits to alleged drug addiction and gang ties.

A few days ago, the “Love Situation” singer announced her return to the island after being quarantined in Atlanta for a number of months as a result of the COVID-19 pandemic. Sadly, an arrival to Jamaica seemingly sparked more drama from Malieboo, who had previously pitched a story to the operators of the Youtube vlogging channel detailing Kingdom’s drug use as the reason for her weight loss. Jada’s alleged ex-girlfriend also labeled the singer’s relationship with American rapper, singer, composer, record producer, and record executive Maurice “Verse” Simmonds as fake.

Four days ago, Jada Kingdom tuned into the post and urged the operators, “Take this nonsense down, kmft.” The request was never actioned, and 2 days later, more content was added to the platform as, Jada Kingdom shared numerous screenshots and receipts of an encounter with her ex, whom she had not seems for 5 years prior. According to the entertainer, she was contacted by Malieboo_toptop and a meetup scheduled for a Mega Mart location in Kingston. Upon grabbing groceries with her assistant, they both went back to Jada’s condo to relax for roughly about 2 hours until it was time for Jada to venture out and for her to grab her daughter. The initial Youtube video was then uploaded, which prompted Jada to wage an all-out verbal attack in her DM, in defensive of the information that was shared in the video. During the verbal onslaught let off by Jada, Dancehall deejay Alkaline and his crew were listed as persons who have had previous sexual encounters with Malieboo. 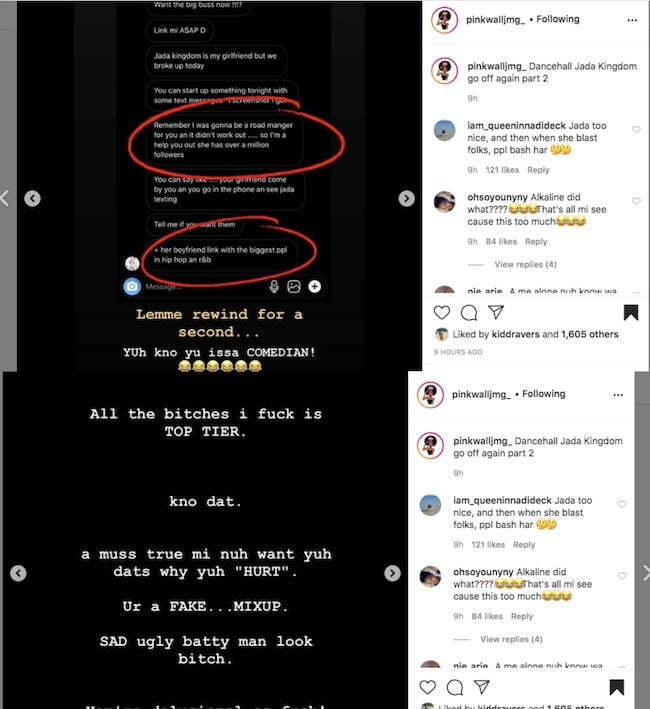 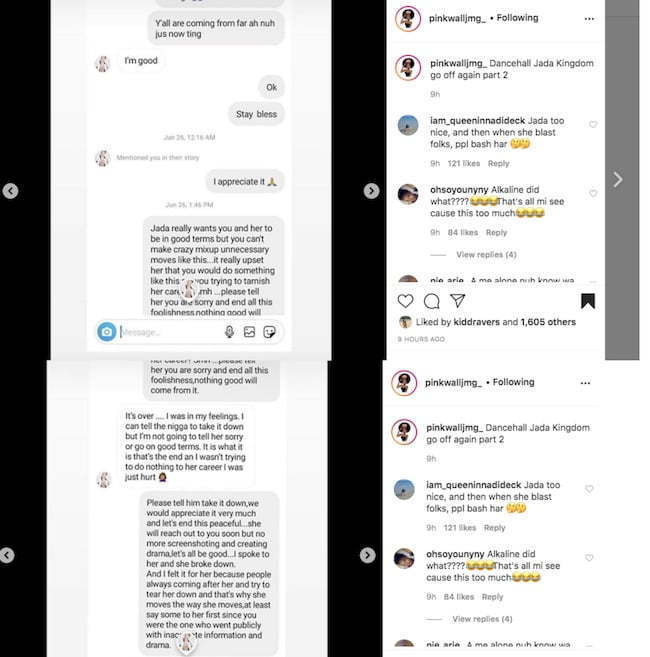 According to Jada, Malieboo then disclosed that she had sneaked and snapped a few photos of her while she was taking a shower during their last meetup at the Kingdom residence. Threats of releasing the images “SHOOK” the entertainer who then requested the images. However, they were never provided. What ensued a week after was an apology to Jada, which was then followed by a request for a mobile phone, which the “One Time” singer said she ignored.

The “Heavy” queen also shared screenshots of conversations sent to her between her alleged ex-girlfriend and deeofficial, pertaining to running the story and nude photos. The Instagram blogger vehemently denied the scoop, and in turn forwarded the messages to the entertainer. Screenshots of Jada’s manager pleading to have the character damaging video removed along with having the nudes sent over were also shared. 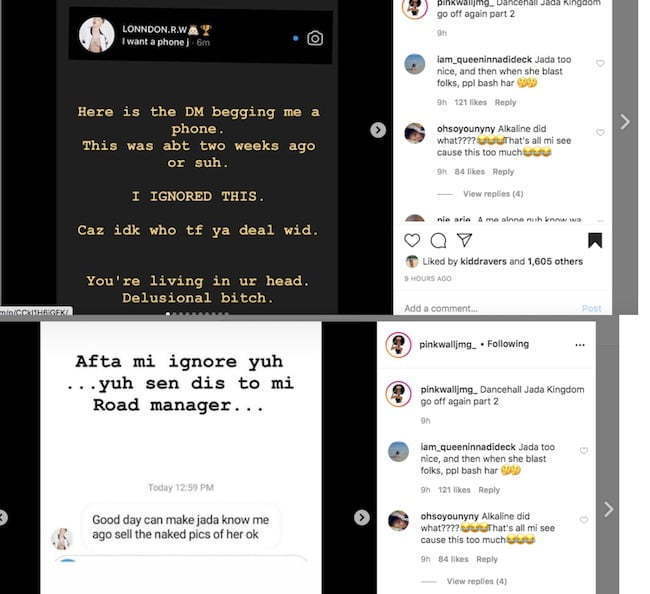 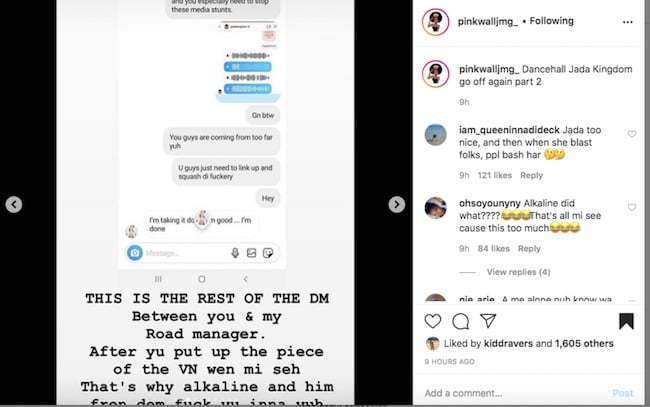 Instagram LIVE must have felt like the only place for Jada Kingdom to apologize to her fans meanwhile issued a savage clapback to the information shared by toptop. She spoke her desire to be free from the drama and to simply focus on her music. However, being a product of the EastSyde, meant that she also made it known that she has multiple ways and people who would be more than happy to assist her in addressing the matter.

She ended the LIVE video on a positive note by promoting her upcoming mixtape and album.

However, that was not the end of the evening’s proceedings as Malieboo_toptop then decided it was time to let her voice be heard via an Instagram LIVE video. She battled choppy internet connections as well as a black screen for much of her session.

The audio and video dropouts, along with the damning accusations, saw her picking up multiple Ls in the comment section, many being from prominent social media personality Ivany Wright, whom she knows personally.

The hate in the comments would not deter her from bringing her points across that the source of the meltdown was that Jada wanted to be in a relationship with Simmonds and her at the same time, something she would facilitate if Jada Kingdom had paid in excess of $800,000.00. 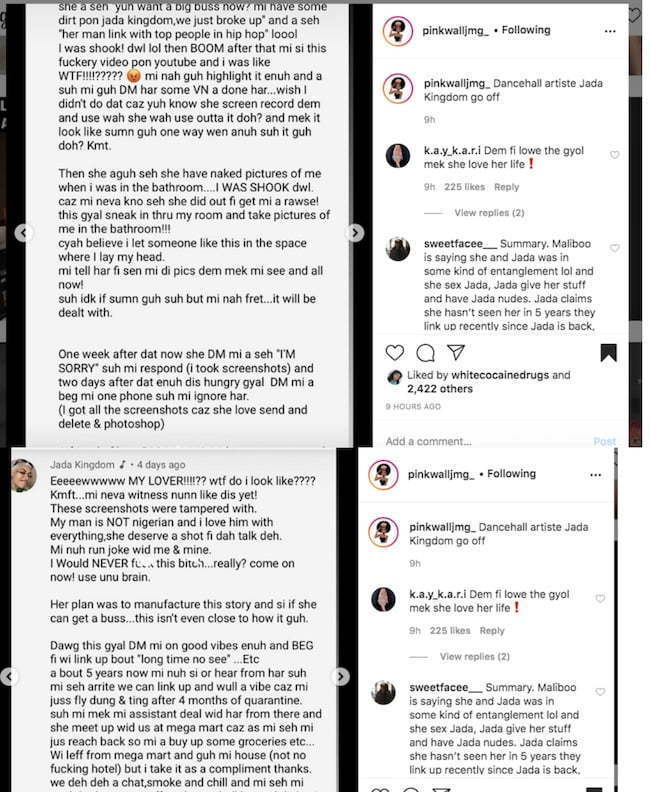 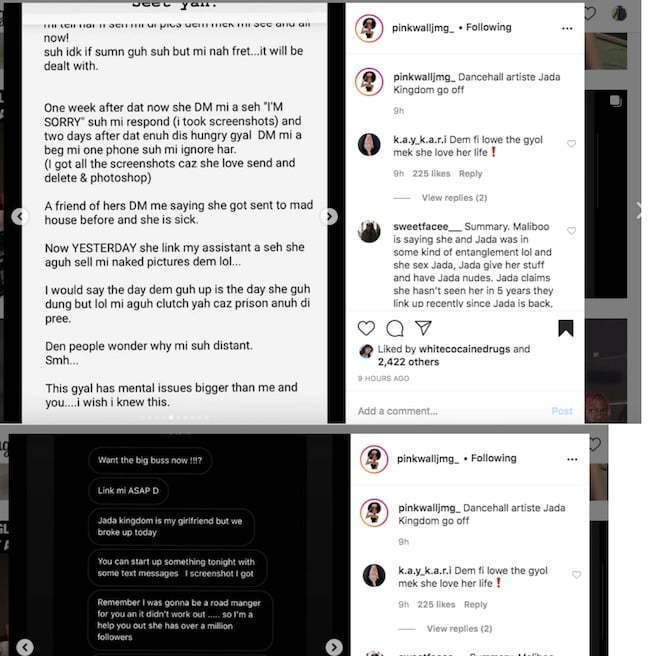 She doubled-down on her claims of Twinkle being a user of cocaine, pills, and other controlled substances, meanwhile deflecting those same allegations that were tossed at her.

Various candid and graphic descriptions of what many would consider kinky sexual practices between herself and her old bea were revealed, which was then used as justification for her request for a new mobile phone. Kingdom’s unproven sexual exploits were also aired, with the names Popcaan and Skillibend being features, with others seemingly being withheld. All the stakes, knives, and daggers were drawn as she expressed that Jada continuously measures up herself to other females in the business and uses her as a replica of The Magic Mirror from the tale of Snow White.

Malieboo’s LIVE was also a way to let it be known that she too hard had firepower in the event that things get physical.

Both women have confirmed that they have known each other from their days in high school and were once terrific friends.