50 Cent is trolling Megan Thee Stallion and Tory Lanez as he asks the question on everyone’s mind about the situation, and now Meg is clapping back.

Just when it seemed that 50 Cent had retired from his trolling career, he hits us with a callous post about the Meg Thee Stallion and Tory Lanez shooting investigation. The news of the “Hot Girl Summer” rapper being shot rocked Hollywood Hills this weekend as fans and onlookers react.

While the investigation is still ongoing, the latest theory that everyone is weighing in on seems to be that Tory Lanez was the one who pulled the trigger. Though it’s not the story that we heard at first, it seems to be the one that fans are most interested in. According to TMZ sources, investigators might be looking in Lanez’s direction next in a case they’ve opened for assault with a deadly weapon. Fans online have been heavy on the speculations as Fifty joins them by sharing a social media meme making fun of the dubious situation.

The TV mogul shared an Instagram post of a still frame from the 1991 movie “Boyz N the Hood” with Megan Thee Stallion’s face edited on to the head of Ricky, the character who was the victim in the scene while Tory Lanez’s head was photoshopped onto the face of the shooter. In the caption, 50 Cent wrote, “Run Ricky Run WTF is really going on?” he questioned.

Many fans shared similar sentiments, beseeching anyone who knows the truth to share a more vivid recollection of the night in question. As the investigation continues, it is already clear that not many people are taking this as seriously as they should. Some fans have even gone as far as to speculate that this could all be a publicity stunt, albeit, it’s a bit far to go for clout. Are you just as lost as Fifty about what’s actually going on here? 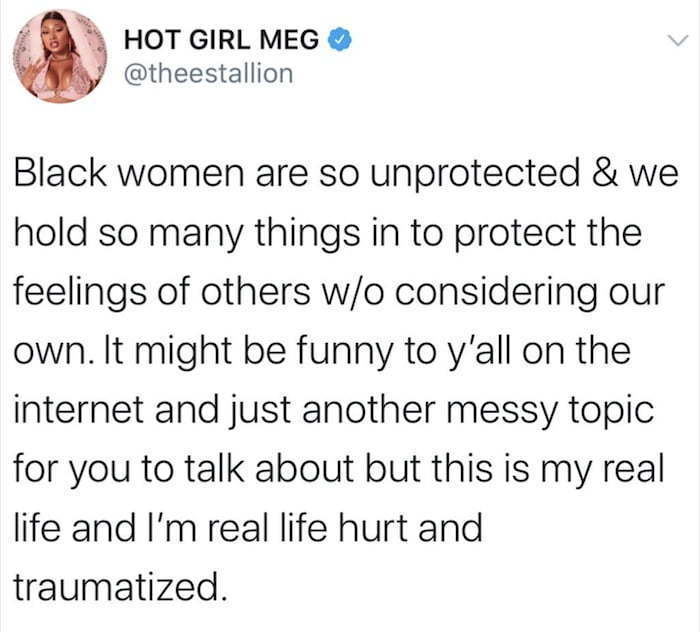 Megan Thee Stallion has since clapped back at 50 Cent for making light of a very serious situation that could’ve claim her life. “Black women are so unprotected and we hold so many things in to protect the feelings of others w/o considering our own,” she wrote. “It might be funny to y’all on the internet and just another messy topic for you to talk about but this is my real life and I’m real life hurt and traumatized.”