Lil Baby is furious about rumors that he was the one meant for the bullet that killed Atlanta rapper Marlo.

Rumors are swirling online that the shooting death of Lil Marlo in Atlanta was the result of a targeted attack that wasn’t even meant for him. Sources say it was a $50,000 hit that was ordered for rapper Lil Baby. Marlo and Lil Baby were labelmates at Quality Control Music, a prominent hip-hop record label that is also home to Lil Yachty, Migos, City Girls and more.

According to reports, officers responded to an emergency call about a car accident on Interstate 285 in Atlanta on Saturday night at about 11:30 p.m. When they arrived at the scene, the victim, Rudolph Johnson, Marlo’s legal name, was found dead in his car. Investigators believe that the rapper was shot in a targeted attack while driving. 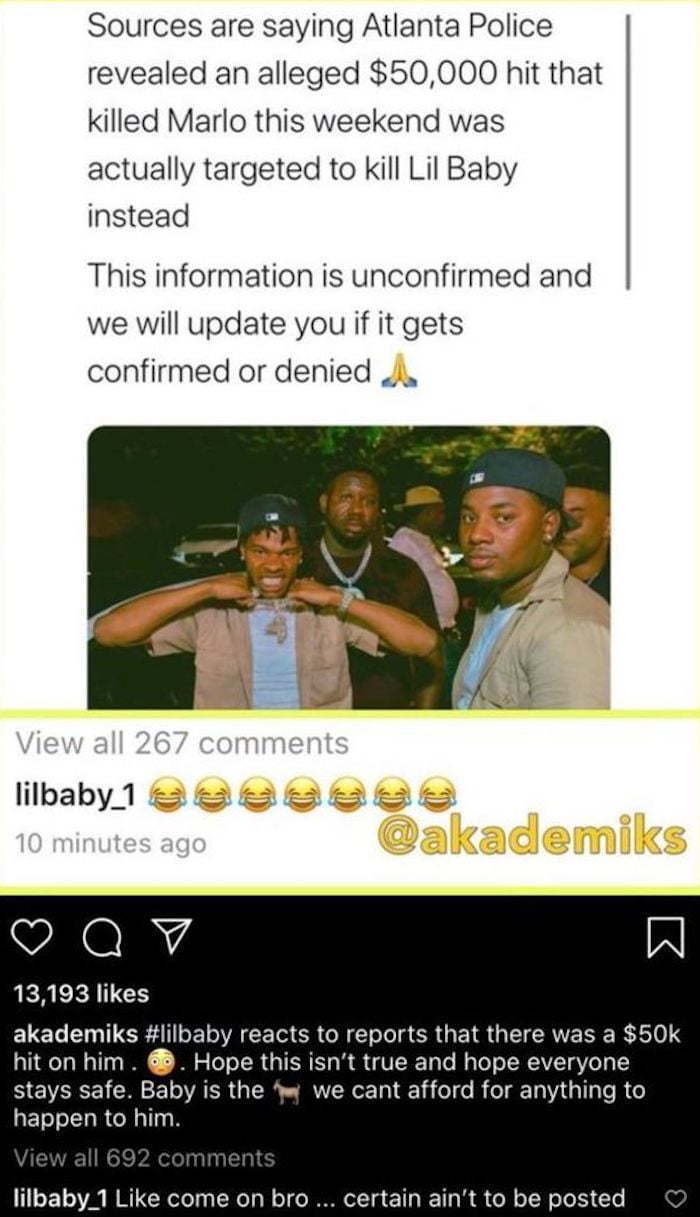 Following the incident, Lil Baby broke his silence on Twitter after more than two weeks. “Legends Don’t Die,” he wrote. “When In the streets kno what comes with this sh*t #longliveru,” the rapper added. He then seemingly denied the rumors of him being the target in the alleged paid hit when he later tweeted, “If you fu** wit me don’t post no weak a** fake news!” Many of the sources that reported the update have since removed the story. “If it wasn’t for my career I wouldn’t be on the internet period …. people be different,” added Lil Baby.

The 4PF rapper and Marlo have collaborated in the past on their song “2 The Hard Way” in 2017. They joined forces again this year on the title track for Marlo’s album “1st & 3rd,” which was released in January. Reports stated that Marlo died at 30 years old, but according to his label, he would have been around 27 years at the time of his death. Sadly, he left behind a young daughter who he just shared a video with on Instagram for Father’s Day.

Our condolences and prayers are with Marlo’s family and friends at this time as we mourn the death of another young rapper.

When In the streets kno what comes with this shit #longliveru

If it wasn’t for my career I wouldn’t be on the internet period …. people be different ?

If you fucc wit me don’t post no weak ass fake news !