NBA YoungBoy attempted to own his masters, but his label told him to kick rocks.

The Baton Rouge rapper gained momentum back in 2016-2017 and inked a 5 album deal with his current label Atlantic Records to further spread his reach and expand his fanbase. It could be safe to say that in some ways, the move has worked out for the 20-year-old rapper since 2019 saw him pulling in extraordinary numbers, rivaling more seasoned acts in the game like Drake and Kendrick Lamar. Still, NBA YoungBoy goal is to own his masters, which he has been unsuccessful in doing.

A lot has happened for the rapper since getting his big break in the game. Along with being blessed with a handful of kids, he is also now a free man to roam the streets, since he was freed from house arrest and taken off probation late last year. There have also been a few downs for the rapper, such as being on the end of a robbery, being the center of baby mama/wife drama, which resulted in a stabbing incident at his home. All the drama seemingly forced Youngboy Never Broke Again to take a bit of time off from music and social media.

He announced his return to social media today with a happy and moving image of himself and one of his kids. However, he followed it up with an IG Story post, which implies that things are not solid with himself and Atlantic Records.

“I said they can have the next 4 albums free all I want is my master in still got told no,” revealed the rapper before admitting the sad side of the music business. “Dirty game,” he added. 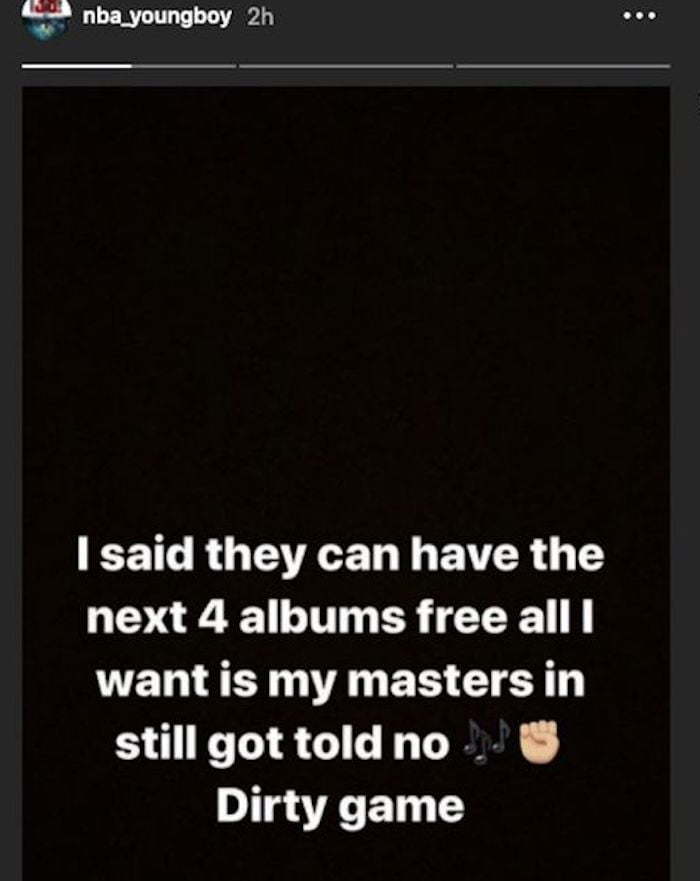 Sadly, this seems like a terrible right of passage that many young rappers have fallen into. Tory Lanez faced a similar situation with Interscope Records, but after what must have been some behind the scenes negotiations, he was able to go independent and secure his masters. The 4 album offer on the table from NBA NBA Youngboy would have been snatched up by most labels, but Atlantic is clearly looking at the long haul for his tracks that could be worth a fortune when the rapper gets even bigger.

Much like Tory, Youngboy spearheads his own Never Broke Again label. However, Atlantic Records, who naturally has the bigger musical muscle, handles most of the heavy distributions. Now that NBA Youngboy has put them on blast, we are sure they should be back to the negotiation table in a bid to appease the “Fine By Time” rapper.