Boosie Badazz is in distress as he mourns the death of a close family member.

Someone certainly needs to check on Boosie Badazz. The Baton Rouge rapper, formerly known as Lil Boosie, is having a rough year. Clearly, its been a difficult year for all of us, but Boosie has had to deal with extra stress between a child support lawsuit, ongoing beef with his former friend, Webbie, and public outrage over accusations that he may be involved in child abuse. Now Boosie has officially given up on 2020 entirely, posting a rant on social media after the death of his close family member.

The angry post raged, “RIP my lil cousin smh f*ck 20/20. F**k everything bout it.” He went on to say exactly where he stands on everyone who no longer supports him, proclaiming, “Death to everybody ain’t down with me. F*ck n****s n f*ck b*tches. COME TRY ME. Don’t nobody call me r text ‘F**K YOU TOO’”. 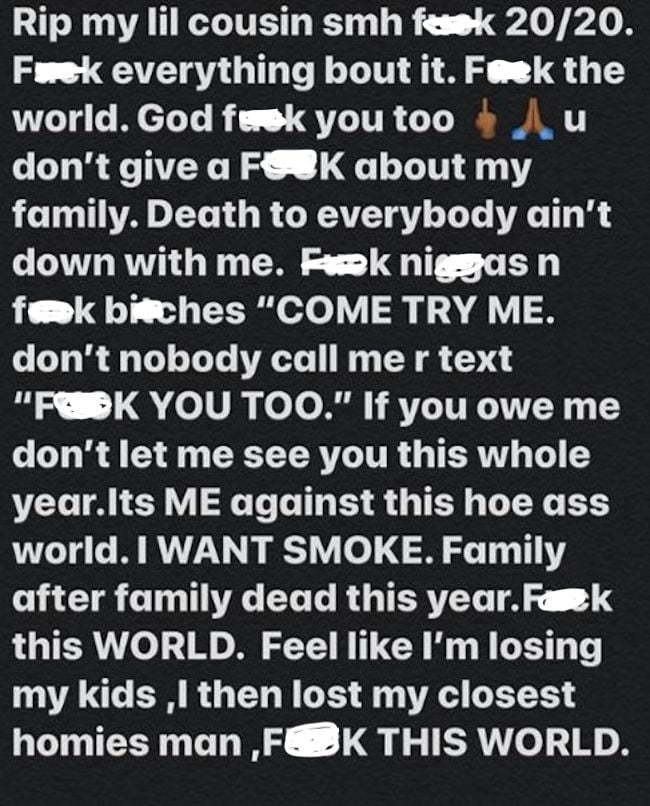 He went on to warn everyone for whom he has ever done a favor, saying, “If you owe me don’t let me see you this whole year. Its ME against this hoe a$$ world. I WANT SMOKE.” He ended the post on a somber note, with “Family after family dead this year. F**k the WORLD. Feel like I’m losing my kids, I then lost my closest homies man, F**K THIS WORLD.”

Boosie later deleted the post and replaced it with two pages on his IG story, one that reads “F*CK THE WORLD”, and another that shows pouring rain outside his balcony with the words, “Rip brenon f**k the world.” It’s unclear at this time how Boosie’s mental state might affect his career, especially given that he recently began working on a lighthearted reality show about his personal life. Hopefully, those closest to Boosie can help him through this difficult time, as well as, lookout for the safety of his children.