Drake is clearing the air after a song snippet namedrops Kylie Jenner as his side piece.

Drake claims the song was leaked three years ago and was mistakenly played by his OVO DJ last night. Fans raised a few eyebrows and got those mental wheels turning after a so-far-unreleased song made its way to the public’s ears. While chatting with OVO Mark on Instagram Live, a single that Drizzy appeared to have recorded with Future was played in the background. Aside from it likely to be a hit when it finally does drop (these are the guys whose collab, “Life Is Good,” went quadruple platinum, after all), it also includes some fascinating lyrics that pertain to Kylie Jenner.

The self-made make-up mogul is known to have had some history with Drake after ending things with her baby daddy, Travis Scott. The pair were even spotted hanging out at Drizzy’s 33rd birthday party. While neither of them ever confirmed an affair, it seems the 6 God has now mistakenly spilling some beans. “Yeah, I’m a hater to society / Real s***, Kylie Jenner that’s a side piece / Yeah, I got 20 motherf***in’ Kylies,” Drake raps on the new track. Kylie’s sister Kendall even cracked a mention. “Yeah, I got 20 damn Kendalls / Young slim baddies and they in vogue / Yeah, I got 20 f***in’ Gigis.”

Given that Drake and Travis Scott are close friends and collaborators, so it’s only fitting that he address this quickly. “”A song that mark ran last night on night owl sound live set shouldn’t have been played,” Drizzy wrote in a message on his Instagram Story. “It’s a song that leaked 3 years ago and got scrapped shortly after. He was just going too deep in the drake/ future catalogue. Last thing I’d want to do is wake up having any friends of mine feeling disrespected so I just had to say that to start off the day.” 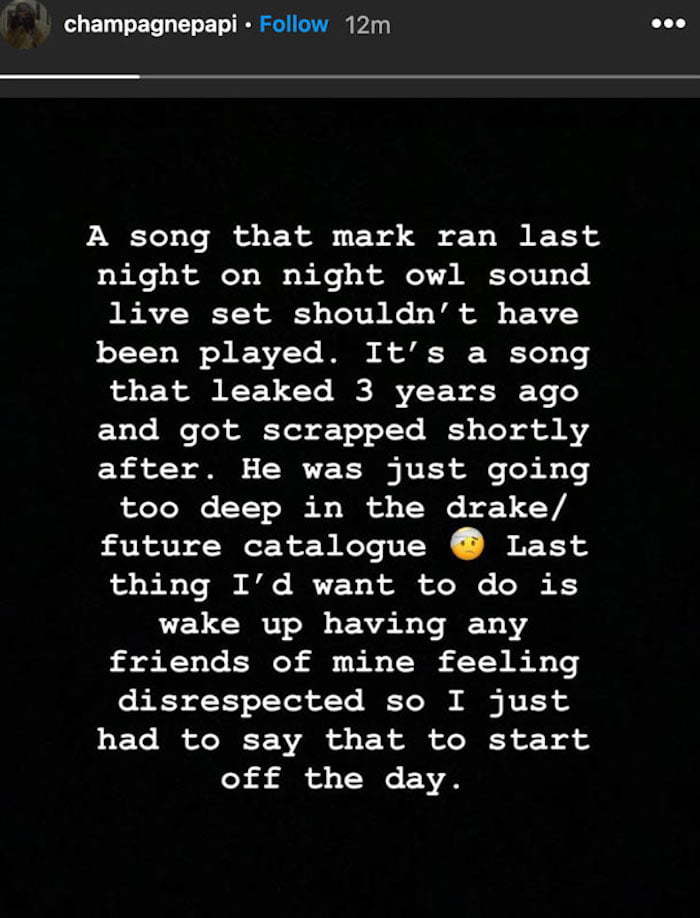 We can’t imagine that the youngest Kardashian-Jenner member will take too kindly to being called a “side piece.” Or perhaps she’ll take it as a form of flattery having been named in a song by one of the most successful artists in the world. Billboard recently confirmed that Drake has tied with Madonna for the most singles in the Top 10 of the Billboard Hot 100 with 38 tracks. With his sixth studio album scheduled to drop in the next few months, it won’t be long until Drake takes the solo crown. It may even be courtesy of his Kylie-quoted song!

It would be interesting to hear the full song. Drop it Drake.

Drake said Kylie is his side piece in this Future collab? Spicy.